You are here: Gaming and other Nonsense » News » Talisman

After getting the Talisman board game (plus many expansions), I decided to paint the figures, a task that I've only just completed. 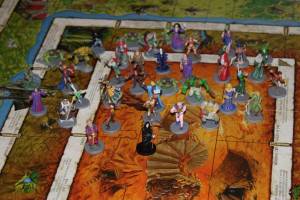 There are 38 figures (33 characters, 4 toads and Death) in my copy of the Talisman board game (all expansions up to Highlands, though I've noticed there are two more expansions either out, or due out shortly).

It's taken about 18 months to get around to finish painting them all, though it was mostly a side quest in between other painting projects.

Talisman is a fun game, but it's not a great game, and tends to go on for a bit too long. However, we do tend to be play with 6-8 players, which is a bit more than the number recommended.

Next up as a painting project, is probably Mansions of Madness, which we haven't actually played yet, but which seems to have got much better reviews than Talisman.