You are here: Gaming and other Nonsense » News » Rise of the Runelords

Rise of the Runelords 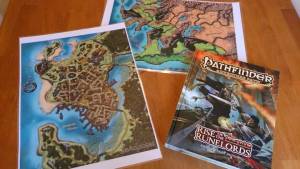 I'm about to start running a Rise of the Runelords campaign using Pathfinder. It's been many, many years since I've run (or played) a d20 like game at the table, so it'll be interesting to see how this plays out. The usual problem is that combat can take ages - using Roll20 simplifies things to a great extent, though it can still be slow.

Most players have also played at least some of the card game based on the campaign, but I hope that this won't ruin things for everyone.

I have printed out the two main maps for the campaign on A3, and had them laminated. They look quite nice (though could really be with being in higher resolution, so that I could up the printed size to A2), and will allow players to scrawl notes on them as and when required.