You are here: Gaming and other Nonsense » News » Shuttles 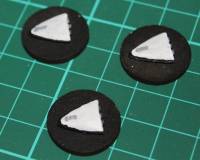 I've painted and mounted some of my shuttles for Full Thrust. The idea is that each model represents a single landing shuttle which moves like a fighter, so I've mounted them on small bases with, and since we don't need to track damage (they are either there, or they're destroyed), they are currently without ID tags. The only issue is that if they are carrying different loads, then we might want to differentiate them.

These models are meant to represent heavy shuttles - there are some rudimentary rules on shuttles in the Full Thrust pages. I have 12 models of this type altogether, plus a similar number of two smaller types (which will probably be light shuttles).

I also have some much larger (probably around Mass 40) interface craft, which will be treated as standard (non-FTL) ships which require FTL tugs to bring them through hyperspace. The current plan is to probably re-work the assault ships to be tugs, so that they can bring through interface craft and possibly extra shuttles as well.