You are here: Gaming and other Nonsense » News » The One Ring 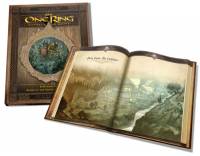 We've just finished playing The One Ring RPG by Cubicle Seven, a game set in Tolkien's Middle Earth just after the time of The Hobbit. Similar in some ways to Pendragon, the game follows a timeline that mirrors the events between The Hobbit and Lord of the Rings, with an adventure or two happening each year. We've only played through a few years of the campaign, but enough to have heard rumours of something bad returning to Mordor. Given that the period is about 70 years, I don't know whether the game covers starting a family and raising a new generation of adventurers as Pendragon does (my character had her eye on Beorn though, just in case).

The game system itself is relatively simple: You roll a d12 (with a special effect on 11 or 12) plus a d6 for each level you have in the skill. We found that this tended to make the results quite random, though you can spend points (Hope) to boost your roll afterwards. Since the average difficulty is 14, you need at least 3 in a skill to have much chance of success.

Coming into the game with an idea for a character concept (a young urban woman, with some flexible ideas about property ownership), the character generation system turned out to be a bit annoying. You select packages which give you background and skills, but the combination doesn't always fit the character concept you have. For me, the backgrounds that fitted my character gave me skills I didn't want and the skills I wanted were in backgrounds that didn't interest me. You could just ignore the background fluff for a choice, but that seems the wrong thing to do.

At least I could take a calling of Treasure Hunter, and traits of Trading and Burglary. The first never really came into the game much (except it did refine some roleplaying decisions), the latter traits effectively allow you to automatically succeed on tasks that relate to them.

You can spend a long time travelling in this game (though once you've got to know a place, it effectively becomes a fast travel location known as a Sanctuary), and there are a set of skills associated with that (which I like). It almost feels like it could have been a fun hex crawl, but it's a bit too abstracted for that to work. Indeed, a lot of the game is somewhat abstracted. You get so many points of 'Treasure' from an adventure for example, which seems very lacklustre. The rules on gaining land and holdings (which you will over the course of the game) are similarly abstract, but probably for good reason.

Character progression is interesting. Common skills are arranged on the character sheet so that each column (there are three) relates to one of the core attributes (Body, Heart and Wits). The relationship doesn't always make sense, but I suppose it makes becoming over specialised harder. Rows are used for gaining advancement points. You get a 'tick' when you get your first success in a row during a session, and another one for your first great success and then your first amazing success. If all your good skills are on one row, you won't get many advancement points. If you're not good at skills that get rolled a lot (such as the Travel skill or its related companions) then you won't get many advancement points.

Advancement points allow you to put up common skills, so it can be a tough choice between skills you actually want your character to be good at (which you may not have started with because of the character generation system), or skills that give you a better chance of advancement points.

Combat skills (as well as your Valour and Wisdom, which can be sort of saving throws, but also give you special abilities or things when you raise them) are put up with Experience. Experience is awarded at the end of an adventure for completing goals, so there's two different advancement tracks (and confusingly, they both use different cost progressions).

Combat itself is relatively simple (choose stance, which affects a PC's chance to hit an enemy, as well as an enemy's chance to hit the PC, then roll to hit and do a fixed amount of damage if you do), with armour and damage working in quite non standard ways. More armour doesn't reduce damage or change your chance to be hit, but increases your fatigue so you effectively have fewer 'hitpoints'. It does however save you when you suffer a serious wound. PCs use a different system to enemies, which I personally don't like (yes it does reduce the workload on the GM, but I don't like the idea of PCs being special in the rules), but it's not the first system to do this.

And then there's the singing. A big part of the game for characters is coming up with songs (you don't have to detail them, at least no more than saying 'a travelling song', or a 'fighting song'), which can be sung when performing tasks to give bonuses. If I'd wanted to play a bard, I would have played a bard. However, the songs were useful, and it fits into the setting.

Overall, I'm not that enthralled by the system. That's not to say I didn't have fun playing the game, but it's not a system I would choose to run. And though my character didn't start off how I envisioned her, some of the strange skill selections did end up sending her down a route I hadn't quite expected.

So yes, it was an interesting game to try for a few months. Next up for our weekly gaming is Shadows of Esteren, which I'm looking forward to.