You are here: Gaming and other Nonsense » News » Descent Into the Depths

Descent Into the Depths 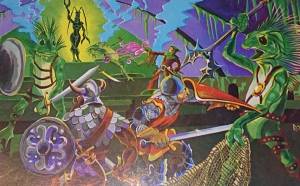 After getting sidetracked to deal with a Scarlet Brotherhood Necromancer (and then sidetracked to find a way to destroy the Eye of Vecna), the party of now (mostly) Epic Level adventurers have begun their Descent into the Depths of the Earth in our weekly Roll20 D&D 3.5 game.

Many months ago they dealt with an uprising of giants and goblins which had been engineered by the Drow Priestess Jhultana. She was dealt with, though they found mention of someone called Eclavdra of House Eilservs who was apparently managing it all from a location deep in the underdark. Having now dealt with all other business, they are now heading town the wide tunnel they discovered beneath the goblin caves.

About 10 miles along, and about 1 mile deep, they encounter a region of null magic (which given most of them are relying on items and supernatural effects to be able to see meant it suddenly went dark). The lighting of torches to progress further alerted ogres and giants up ahead to their presence, and they immediately came under attack by rocks and clubs from ogres and giants, which without the benefits of their usual magical protections was significantly more deadly than they were expecting.

Pushing forward (either on foot or by a teleport across the region) they encountered further stone giants, as well as Drow warriors and clerics. The party's wizard only just survived her own meteor swarm (thanks to a friend shield ring with the dwarf), and along with a horrid wilting (a greater meta magic rod of quickening taken from the previously mentioned necromancer) managed to clear things down of enough spell-buffed (unholy aura and other effects) drow to allow the cleric out of the silence'd area to start bringing her spells into effect.

The Druid (shapechanged into various creatures, including beholders and pit fiends) drove off reinforcements, and the Drow High Priestess in charge of the checkpoint was defeated with a single very unlucky fear save (she rolled a '1' when facing the Druid-Pit Fiend) just before she was going to rip the wizard apart with her tentacle rod.

In the end, the checkpoint was secured with only one party death (the rogue, who's ring of blinking failed him just before a much needed Mass Heal) and a couple of near deaths. It was one of the toughest fights in a while, and could have easily resulted in a lot more deaths, if not a TPK if things had gone slightly differently.

They now have a charmed Drow female, a blinded Drow male and an epic-level intelligent tentacle rod that very much wants to kill them, as well as a heavily fortified Drow checkpoint to explore.