You are here: Gaming and other Nonsense » News » In Search of Sanity

In Search of Sanity 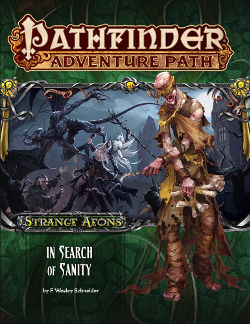 Our weekly 7th Sea game finished a few weeks back, and we have now started on another Pathfinder adventure path - this time Strange Aeons. For those who don't know, it's effectively a Lovecraftian horror scenario which begins with the characters waking up in an insane asylum with no memory of how they got there.

We've been playing Pathfinder on and off for the last few years now (some of us are in a monthly Serpent's Skull campaign that has been running for 3 years, and I've been running Rise of the Runelords on and off for about as long during our weekly game nights, one chapter at a time), so we're reasonably comfortable with the basic classes to want to begin experimenting a bit. I've taken a Spiritualist (so trying out the Occult classes as well), and we've also got an Inquisitor, a Shaman and a Swashbuckler with only the Rogue being a standard class (and even they are heading towards being an Arcane Trickster).

It does leave us with some interesting gaps in our line up, but then Strange Aeons could potentially be a non-standard adventure path so we might do okay if we're careful. The big range of mechanics options during character generation is one of the things I like about Pathfinder, but given the limited number of campaigns we've started there hasn't been much opportunity to try different options.

Our GM is very keen on all things Lovecraft, so was keen to run this path as soon as she heard about it (given how little interest there is from the rest of the group to play actual Call of Cthulhu, it seemed a reasonable compromise). I'm interested to see how much it plays like a Horror game rather than the kill-monsters-for-xp game that Pathfinder often is. Horror is also often about there actually being a serious risk of getting killed, whilst an Adventure Path sort of assumes that characters will survive (or at least, enough of them) for all six chapters in order for the story to play out. Pathfinder APs also assume that the PCs will win in the end - another difference to Horror games.

Though we're playing face-to-face, the GM has a lot of the notes and creatures defined in Roll20, using that to manage the game (much like I did for the previous episode of my Rise of the Runelords game). We still use tabletop miniatures for combat and mapping, so we get the advantage of streamlining the combat along with the advantage of real physical items on the table. 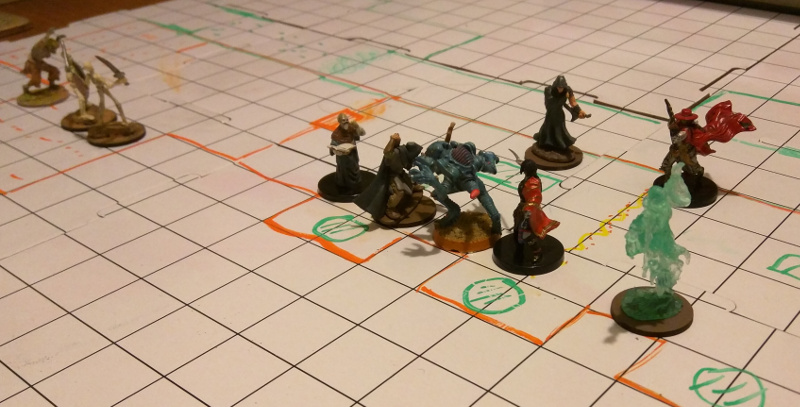 So far we've made it to second level, and are beginning to try to find out what has happened in the asylum. It does feel a bit horror-like at the moment, given that we have no clue what is going on and many of the things that we're meeting do seem to be quite insane. Only one of us has gone insane so far - my spirit, who turns out to be really bad at dealing with insanity. Since she's probably our best front line fighter at the moment, losing her could be bad.

The first two sessions have gone well, and it's been a lot of fun. We'll see how it progresses over the next few weeks.

For a somewhat abstract (probably spoiler filled) account of our adventures, I have a diary written from the point of view of my character. Assuming they survive long enough, I intend to keep it updated as our adventures continue.