You are here: Gaming and other Nonsense » News » Character Information 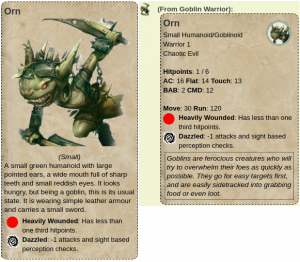 Over the last few years that I've spent GMing on Roll20, I've written a number of API scripts to try and make that process simpler. Recently I've been tidying up these scripts to make them more consistent, and also to make better use of the Pathfinder Character Sheets that didn't exist when I started.

There's two main API commands for getting information about a token - !pfdescribe and !pfinfo. The first is designed to output information to the chat window for players. I find putting information here, rather than in another dialog, to be quicker and easier. Running !pfdescribe on a selected token will output the name, avatar image and bio of that creature, merging information from both the graphic token and character. As a bonus, it will also check for status markers on the token, and output condition information about it. For instance, the Goblin shown here is both heavily wounded and dazzled.

The !pfinfo command is for use by the GM, and displays some basic stats about the creature, which also includes any condition effects that apply to it, just like the description. If the creature has special qualities, such as SR or DR, or attack or defence notes, these will be mentioned. It's also possible to add a note to the character sheet which will appear highlighted for abilities which are really important to remember (but which I'm likely to forget in the middle of a game), such as everyone having to make fear checks as soon as they see it.

The first is if the token has the same name as a handout, in which case any graphics and text from the handout are displayed instead. In this example, The Celwynvian Charge is a point of interest on a map. My current campaign is set in the city of Magnimar, and so one page consists of a map of the city. Various icons on the map can be clicked on by players to get information on the site.

If the token doesn't match a handout name, then the notes from the token are displayed. This was mainly designed for putting room descriptions on the map for dungeons and the like. It's also possible to reference images from the description, in order to show a picture. For basic text, I don't want to have to create a handout for every room, so instead just have a simple token (in the GM layer) with some text that I can run a macro against. This outputs the room description to the chat window. This allows me to give a quick freeform description of the room, and use the text for a more formal description which the players can read at their leisure.

I haven't got around to putting the scripts into the official list yet, but PfInfo and PfDescribe are currently available on GitHub. PfInfo is the core script which is depended on by PfDescribe.