You are here: Gaming and other Nonsense » News » Catacombs of Wrath 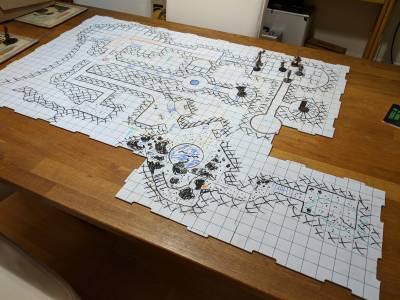 Several years ago I started our first Pathfinder campaign using the Rise of the Runelords adventure path, and so far I've been running one or two chapters a year. We've just started on chapter five - Sins of the Saviors, with characters up to twelfth level.

Each chapter has been played slightly differently, as my understanding of the Pathfinder rules have changed over the years. For the previous chapter I switched to using Roll20 for managing things on the GM's side, with players still using pen and paper (well, PCGen in some instances) character sheets and real dice.

For this chapter I'm doing much the same, though the use of my API scripts from my purely Roll20 Magnimar campaign are streamlining some of the combat. I've also switched to almost entirely using miniatures. Previously we used a mix of Pathfinder Pawns and other things. This time I made the effort to make sure I have a figure for almost all of the creatures in the adventure. Painting them all took longer than expected, so I may not do that next time around.

Having miniatures on the board does look good though, along with the dry-erase dungeon tiles for mapping. Though I can throw a digital map up on the TV, I prefer to use this mostly for record keeping for me, and have the actual positions of everyone on the real table.