You are here: Gaming and other Nonsense » News » Carbonaceous Asteroids 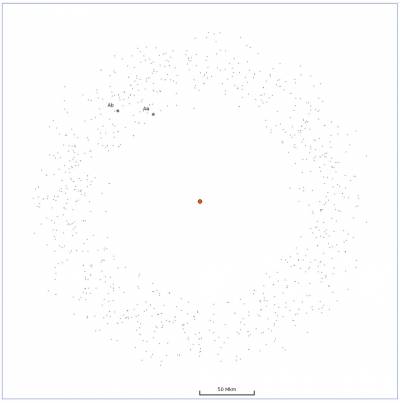 I've had some time to work on my WorldGen application, and have the first basic implementation for moons. Unusually, they've been implemented within asteroid belts, which don't technically have moons but the backend framework for moons (which are really just planets associated with another planet) fit what I wanted to do.

So asteroid belts can now have individual named 'planetoids' within them (of a size comparable to Vesta or Ceres), as well as the undefined (generated from a random seed every time they are needed) smaller asteroids. The solar system map displays their current position within the belt, orbiting along with everything else.

I've now also have a way to generate a 3D map for such an asteroid, using a distortion texture which is applied to a simple sphere. This gives an irregular natural looking shape, though it can't produce anything as irregular as Comet 67P/Churyumov-Gerasimenko using this technique.

There's also a modifier that smooths out larger asteroids, so Ceres sized asteroids will tend to be far more spherical than smaller ones.

The textual descriptions of such worlds needs some work (to be honest, there's not a lot that can be said about a small barren rock, so coming up with enough unique random text to make them interesting is hard), and there's still lots of bugs in how moons get displayed on the web page, but there is progress.

I've also possibly decided on nomenclature for belts, giving them capital letters to denote their position. The first (innermost) belt in the system will be A, the second B etc. Named planetoids within the belt will be labelled from innermost to outermost, starting at 'a' and going onwards. This matches the naming for moons, but they have a roman numeral (for the planet) followed by a letter (e.g. our Moon would be “Sol IIIa”), which is clearer. So I might still change things.