You are here: Gaming and other Nonsense » Full Thrust » Point Defence Systems 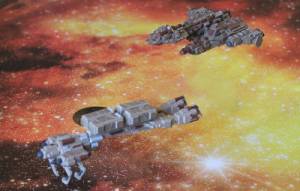 The first is already included as an option (somewhere) in the rules, the second is not. The reason for the change is so that in several cases it makes sense for a civilian or other non-combat vessel to be very lightly armed. They can carry a single PDS system, and still have a (small) chance of fighting off attacking ships, without having to carry a complete fire control system.