You are here: Gaming and other Nonsense » Islands in the Rift » Roll20 Scripts

Since the campaign is being run in Roll20, I have written some scripts to help make it easier for me to run things. They are all available on GitHub.

This lists all defined attacks for the selected token. Selecting an attack will make an attack skill roll and a damage roll.

Used to roll initiative for the selected token. Takes the highest of Dexterity and Intellect, and adds that modified to 2d6. 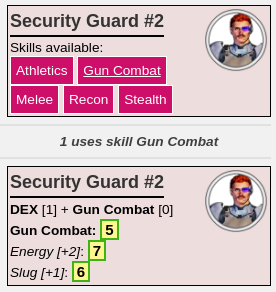 Lists all the defined skills for the selected token. Each skill can be clicked on in order to roll it.

The default characteristic (as set on the character sheet) is always used, and DMs cannot be specified this way. But it is a quick way to roll skills.

If a skill has specialities, then the result for each speciality is shown. Each result is off the same dice roll.

The above use some of the API commands available.

This makes an attack, possibly with modifiers.

An attack is rolled for skill and damage with the named attack for the currently selected tokens. If multiple tokens are selected, then they each make an attack.

If a +N/-N modifier is specified, then the DM is applied to the dice roll.

If a single +/- is specified, then it is treated as a Boon or Bane, rolling 3d6 and keeping the highest two (Boon) or lowest two (Bane).

This makes a skill roll with a given characteristic, possibly with modifiers.

Like with attacks, DMs and boon/bane can be specified.

The skill name needs to be complete, but case is not important.