You are here: Gaming and other Nonsense » Traveller » Golden Age » Characters » Daslija Niaghuvi 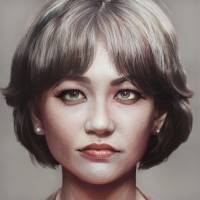 Daslija Niaghuvi is an ex-infantrywoman in her 50s, who has seen her fair share of combat. She isn't as nimble as she used to be, and walks with a limp. She is still tough though, confident and looking forward to retirement. She can be quiet and reserved, and doesn't make friends easily. But she tries to be dependable and honest.

Daslija Niaghuvi is a 50 year old woman from Dimorus (Trojan Reach, 3011). Though she had academic interests, she knew she wasn't quite bright enough to get into university so was expecting to get a standard job as a labourer, either in the mines or preferably at one of the factories. However, by the time she left school the economy was in a down turn and there were no jobs available. So she surprised herself and her family when she enrolled into the draft, joining the Imperium infantry. And there she stayed for the next 30 years.

Straight out of training she was involved in a land war in the Outrim Void, where her unit was surrounded and had to hold out waiting for reinforcements for 5 weeks. She received a medal of bravery for her actions in that war, getting a promotion and training as a smart gun operator.

She didn't make many friends in the army, she tended to be quiet and reserved, though her squad trusted her. She was considering applying for a commission, relying on one of her few friends, Liir Rakhikiir, to help her with the application. Unfortunately Liir 'lost' Daslija's application and submitted her own, getting the commission herself. The two have been rivals ever since.

Daslija tried to apply for a commission the next time the opportunity arose, but by this point she was considered to be too old and was rejected.

She continued to serve her terms in the infantry, fighting several brutal engagements, including getting experience fighting in hostile environments on a number of worlds. She was shot several times, though was successfully patched up each time. She was promoted again, with her superiors recognising her flexibility and competence, but by now she really was getting old, and managed to injure herself badly during a regular training exercise.

After that she started to move off the front lines, and was unfortunate enough to discover that her CO was involved in illegal arms smuggling. She reported him, but was discharged from service as part of the cover up.

She is now retired, and looks back on her unexpected career with some degree of fondness. She's not sure that settling down is quite for her yet, but realises that her body is not what it used to be and that she's no longer fit for military duty. She's hoping that retirement can bring her excitement of a completely different nature.

For Daslija, I decided to take her through as many terms as possible. I didn't quite get her to rank 6, and a didn't think to try for a commission until it was too late. But she's out with a reasonable pension and lots of benefits.

Her first career choice was for a Citizen (Worker), but failed, so got drafted.

Failed to get into Citizen.

A bad ageing roll and it was probably time for her to leave, but I wanted to try for a final advancement to rank 6.