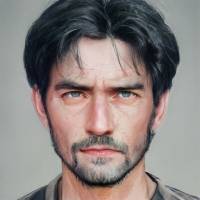 Dikiishgu is a straightforward, no-nonsense person. He is serious when he is working, but is capable of relaxing and being sociable when needed. He is honest and loyal to those he works with, and despises anyone who seems duplicitous or untrustworthy. He expects everyone to do their best at all times, and can chew people out who he thinks aren't pulling their weight.

Dikiishgu grew up on Ayldem (Trojan Reach/ Tobia / 3013), where he attended university to study science and engineering. He was on track to gain an honours degree, but in the final year one of his flat mates, Lokeni Riontev, emptied out his and his friend's accounts and ran off with the money, leaving them penniless and without a home. The disruption impacted their course work, but Dikiishgu was able to scrape through with a pass.

From there went on to join the Imperium Navy as an engineering officer, specialising in Jump Drives. he demonstrated his competence and quickly climbed the ranks, being promoted to Commander by the age of 34 after proving his loyalty to his ship and crew when he very publicly turned down a bribery attempt. From that point he realised he couldn't betray those who trusted him.

Soon after, he was involved in a major battle against pirates along the border on the Trojan Reach, where he was noted for his bravery under fire and was given his own command as Captain of a light cruiser.

However, on a routine patrol there was a high velocity collision with a rock that penetrated the hull and killed several of his crew. He was severely injured, but survived. Looking for someone to blame for the loss of the ship, the Navy discharged him.

He has a small pension and some savings, and is looking for a crew to take him on. He's quite had it with being the one responsible for everything, at least for now. He does want to find Lokeni though, and pay him back for what he did all those years ago.