You are here: Gaming and other Nonsense » Traveller » Golden Age » Characters » Dulaku Makukuu 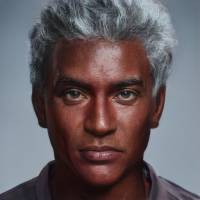 Dulaku Makukuu is a scientific researcher and engineer looking for research topics that interest both him and his wife. He's looking for honest people to work with, and doesn't take kindly to being misled.

Dulaku Makukuu grew up on Hex (Trojan Reach, 2715), where early on he took and interest in mechanics and electronics, taking every opportunity to go into orbit and play around with machines. He got accepted into university, studying science and engineering, and then war broke out.

Several nations on Hex went to war, and Dulaku was drafted into the local marines half way through his degree. Due to his technical knowledge he was able to go into a supporting role in the artillery regiment, but was himself the recipient of an artillery strike, and sat out the rest of the war in hospital.

After the war he got a job working in a science lab, where he made a breakthrough in the understanding of Jump physics. He was quickly promoted, and hired to work on a secret military project working on computer simulations.

He took a job opportunity at a larger university at Tobia, working with Dr Tloeiftiyrh, an Aslan scientist with a reputation for having a rather eccentric way of approaching problems. This got him noticed by his peers, but the stress of the long hours and intensive work ended with him suffering a heart attack. He took a step back for a bit, and met a biologist by the name of Professor Irmir Najashju Sakiluur, whom he married.

He moved out of pure research and into engineering, and was several times offered the chance to falsify his results by the company he was being funded by. He kept on resisting, but eventually they sabotaged his work completely, presumably because his results weren't what they were wanting. Given the choice between giving up or starting from scratch, he decided to quit. By now he had a pension and a part share in a ship. so he's now independent and looking to do his own research according to his own rules.