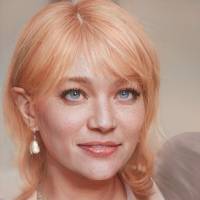 Everilda portrays a cheerful, somewhat dim exterior. She's happy to play at being 'easy' target, especially if high quality food and accommodation are being promised. She'll hang on to people for as long as she needs to, all the while trying to find a way to get money and gifts.

Everilda Engel grew up on Neubayern, the daughter of a rich businessman with lots of connections in high places. It became clear pretty quickly that she didn't have the aptitude for academic study, so her parents wrangled her a job in the Neubayern intelligence service. During her training, she had a sexual relationship with a superior, Hans Fischer, which became quite intense and lasted during her time there.

During preparation for a deep cover mission she was provided with combat implants (for emergency use only), but accidentally came across information that would embarrass several high ranking members of the service, in particular Assistant Director Johan Krimler, who for a short time had a shoot to kill order placed on her.

She escaped, vanishing into the underworld and changing her name to Everilda Erato. Her luck was soon to run out though, and after a botched attempt to blackmail some Joyeuse diplomats was forced to flee Neubayern in a stolen shuttle. She managed to get passage aboard a ship as a Steward (though she spent more time in the Captain's cabin) and made her way out of the Islands.

For a few years she worked on large star liners, managing to steal and con money out of the passengers. Then she ran into Hans Fischer again, who was on his own engagement. She managed to persuade him to let him help her, though in retrospect that was probably his plan all along, since he betrayed her and left her to take the fall as part of his getaway plan.

She feels betrayed and let down, and is now struggling to find another job to keep her in the style to which she wants to live. She can still barely speak a word of Anglic or Vilani, but that is part of her cover that cause people to underestimate her.