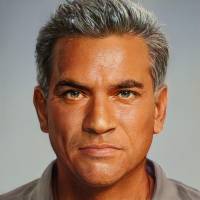 Fernando is somewhat overconfident about his abilities and tends to see the positive side of new endeavours, assuming that he can just deal with any situations that come up. This isn't always true, but he always has an excuse ready and an exit plan prepared.

Fernando Fabian grew up on Esperanza (Reft, New Islands, 0926), the fourth son of a middle-class family who weren't too interested in what he did. He wasn't cut out for school, so instead bunked off to try his hand at breaking and entering, or simple pick pocketing. He got overconfident though, and was caught.

Fortunately an uncle of his, Morales Lorca, was a lawyer, and managed to get him out of a jail sentence in return for some favours. Rather than learn his lesson, he fell in with a local crime lord who introduced him to more lucrative jobs via, Djau Branwen, a corrupt starport official who could get stolen goods off-world. He met up with another thief, Julieta Garcia, giving up a sizeable windfall in order to keep her out of jail.

They worked together for a while, Julieta would work on the inside and allow him to get in from the outside and do the thieving.

Unfortunately one job went badly wrong and he was crippled for several months, a situation that took a large chunk out of his savings in medical bills. By this point he was getting tired of always looking over his shoulder, and decided to try to go straight, getting a job as a delivery driver for a while.

During that time he got to know people working to overthrow the oppressive government, and by now feeling the need to 'get back in the game' helped to plant explosives. However, the entire operation was foiled before it began, and he had to quickly move city, taking jobs in less affluent areas. He thought things were getting back to normal, when one of his ex-conspiracists spotted him and blamed him for their failure. An attempt was made on his life which almost killed him, but again he survived.

By the time he was out of hospital, he was starting to feel his age, so decided to leave Esperanza for the first time. From his connections and investments he managed to get a share of a ship and collected savings and headed out into the Islands.