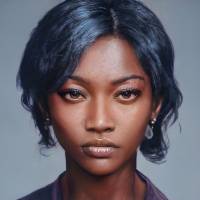 Dr Gardner is a bright woman who believes that her best years are ahead of her. Things haven't always gone her way, but she tries to remain optimistic about the future. She can be slow to trust new people though, having been burnt before.

Grace Gardner grew up amongst the asteroids of Serendip Belt (Reft, New Islands, 1323) daughter of two low ranking engineers who instilled a love of all things technical and scientific in their daughter. At university she studied Medicine and Cybernetics, and got involved in a pro-peace political movement. That distracted her from her studies, so though she graduated she failed to get the Honours that she was hoping for.

She took an interesting job at a teaching hospital, broadening her skills into Xenology but despite excelling was looked over for promotion. She doubled down and did investigative research, but her paper was stolen by her boss Dr Sarah Miklaganki, who failed to credit her. Fed up, she found a new job across the system, where her new boss appreciated her efforts and they formed a long lasting friendship.

However, whilst still only 34 she realised she was getting bored, so her boss suggested that she went out to find strange aliens rather than waiting for them to come to her. Through some help from his contacts, she managed to get her hands on an old Lab ship, the Prime Explorer, and is now ready to head out with a crew and a mission of her own.