You are here: Gaming and other Nonsense » Traveller » Golden Age » Characters » Ika Kalim 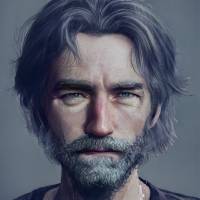 Ika Kalim is a pirate with a reputation for being hot headed and speaking his mind, even when doing so isn't the most diplomatic option.

Born on Ayldem, Ika Kalim tried to get into the Military academy but was rejected, so instead enlisted directly with the army. Within the first year of finishing his training, he found himself abandoned with a small team on a barbarian world defending the downport against a rebel insurrection for two months. When they were finally rescued, he was given a medal for bravery and promoted. He seemed to be on the path to further quick promotions, but then had a run-in with his CO who's incompetence led to the death of most of his unit. Unable to keep his mouth shut about the incident and who was to blame, Ika was discharged

Unable to find any jobs, he worked as a scavenger for a bit, though was badly injured in an accident leaving him with a large medical debt. So he signed up to join a crew that turned out to be pirates. They worked mostly along the Dust Belt in their ship the Smooth Merchant. Soon after joining, he realised that there was the possibility of him being kicked off the ship due to not getting along with a couple of the crew members. Fortunately he had the opportunity to ensure that they met with an unfortunate accident whilst on a raid. Not only did he get rid of a couple of potential enemies, he also got a promotion.

He got a reputation for violence when he came up with a plan to rob a rich merchant ship. It ended with the death of most of the merchant's crew, but also resulted in a large payoff.

He spent the rest of his career enjoying a life of piracy. He got into a couple of feuds with other members of the crew, sometimes winning, sometimes loosing. His last feud resulted in him being left for dead on Paal, though not before he was able to funnel off his share of the ship's funds.

He is now looking to see what to do next, hoping to find another crew to join on with.

Failed to get into Army Military Academy.

Try to get up physical characteristics.

Try to get into Merchant (Marines), but fail. Go for drifter.