You are here: Gaming and other Nonsense » Traveller » Golden Age » Characters » Oudri Kugudila 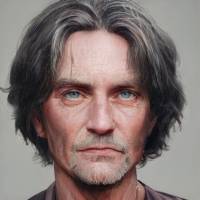 Vilani, male, 58. Oudri Kugudila is a 58 year old man who has served almost three decades in the merchant marines as a pilot and officer. He's generally calm, honest and polite.

Oudri Kugudila grew up on Tobia, and decided early on that he wanted to be a rocket scientist. However, he flunked university due to spending too much time involved in student political movements, Unable to get a job at an engineering company, he took a job as a project manager in a civil engineering company.

He found the found boring, and though slowly began to get promotions, his only claim to fame was his cooking ability at the yearly company summer BBQs and chilly bake offs. Unfortunately, he tried to be too clever one year and his attempts to deep fry steaks frozen in liquid hydrogen when badly wrong. He was almost killed, several others were injured and he found himself out of a job.

The only option was the draft, and he joined up with reluctance, finding himself in the merchant navy. His knowledge of how some of the local businesses worked helped him here, and he got promoted above a couple of others who took it as a personal insult.

He'd expected that he'd stay in the marines until he found a 'real' job, but whenever he got the option to leave he declined. His education allowed him to take on roles which didn't require actual front line duty, and he found himself flying huge super freighters as well as smaller craft.

Oudri gained a reputation for being honest, turning down several attempts to persuade him to help in smuggling illegal cargo to pirate factions beyond the border, even though it got him an enemy of a crime boss in the Broken Arrows.

By the time he was into his forties, he was organising conveys and escorts for major corporations, and was awarded with a TAS Membership by a small corp whose ships he'd saved from a pirate attack through careful planning.

Age was taking its toll though, and his last job was working with Aslan merchants in the Outrim Void, organising combined Human-Aslan convoy operations between the two empires. After one particularly hard week, he had a heart attack and almost died. He decided that now was a good time to take a pension and retire.

He owns a large stake in the Free Trader Dreaming of Blue which he captains along the border, keeping just within Imperium space to stay safe. He's just about turning a profit, and is doing it to keep busy now rather than get rich. Though he never got to do what he originally wanted and he wouldn't call his life highly eventful, it's been an interesting run.

Tried to qualify for Agent, but failed. Got drafted instead.

He “dies” this term, so pays the medical bills to ensure he can continue. Given that his dex is down to 1 now, he decides to call it quits.