You are here: Gaming and other Nonsense » Traveller » Golden Age » Characters » Thutrisha Oastrifreok 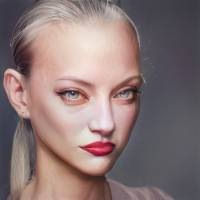 Thutrisha Oastrifreok is a woman in her fifties who has had a colourful life. Now a socialite who uses her wide network of contacts to live a life of leisure and comfort.

Thutrisha Oastrifreok came from a middle class family on Darchna (Tobia 2912), and went straight into starting her own business running penetration tests against local companies looking to beef up their security. Over a period of several years she built up a reputation and a network of contacts, and she was viewed as a competent and reliable security consultant.

Unfortunately she found that a quicker way to make money was to sell the weaknesses she found in corporations to criminal elements looking to make use of them. With that, she bought up her position in society, which allowed her to gain more trust and began actively steeling from clients.

Whilst she wasn't discovered, suspicions were beginning to fall on her, so she quickly stole a ship and left. She managed to use the ship to get herself a job as an Imperium courier, but before too long she ran into trouble in the Outrim Void when her ship was attacked and destroyed by pirates. She escaped, but had to hitch-hike her way back home, making a number of friends and enemies along the way.

On getting back home, Thutrisha decided to get back into a life of crime, but again fell afoul of the law. Whilst trying to escape from a high security technology lab she was shot and almost killed, Her companions managed to get her to safety and get her patched up at a back street clinic, but it left her with a hefty bill.

It was then though that she realised that her public reputation was enough to trade on itself, and through her contacts managed to fund a nice lifestyle for herself. Always on the edge of bankruptcy, but managing to live a good life through a brazen attitude and relying on friends as much as possible.

One of her old friends, Albert Sikuumkhibbi Suudukhuuri turns against her when he finds out that she's been taking advantage of him, but is unable to convince her other friends of that.

She found that her contacts gave her access to political influence that she didn't realise she had, and begins to appear on celebrity talk shows as a 'famous person', though nobody is quite sure what she's famous for other than appearing on talk shows and giving her views on how things should work. She's never too worried about which side of an argument she comes down on, other than trying to ensuring that it's going to be the winning one so that she looks successful.

As she entered her fifties, she found herself in higher demand on the party circuit as an influencer, her web of contacts allowing her to put people in touch with each other, especially in Tobia and Sindal sub-sectors.

She now has a ship of her own, a small fast yacht called the Pryme Comet, which she uses to make sure she doesn't outstay her welcome on any worlds around Tobia.

Thutrisha was all over the place in careers, since she failed so many survival checks. I got her up into her late fifties, but her physical stats were by this point too low to risk any further ageing.

Trying for roles on the 'Personal' table to get her physical stats up.