You are here: Gaming and other Nonsense » Traveller » Golden Age » Characters » Umne Shiipuna 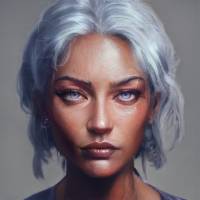 Umne Shiipuna is a somewhat frail woman who always seems to have a cough. She has a tendency to jump into things without thinking, and often overestimates her ability to do things.

Umne Shiipuna was born on Hradus (Trojan Reach, 2714), and always had a strong desire to leave the strict laws of her homeworld behind her and become a merchant captain, sailing the spaceways with her own ship. However, she never had the patience to sit down and study, and failed the entrance exam to the merchant academy.

She managed to get herself a job at the local starport, though found that she was mostly regulated to helping load and unload ships rather than actually helping in the buying and selling. At least that meant it wasn't her fault when the company she worked for when brankrupt.

Unable to get off-world, she found a job in law enforcement, helping to track down dissidents. Her paths crossed with Sajikimshem Kaliim, a woman working in the bureaucracy who was able to provide her with information.

When given the opportunity to go undercover, she leapt at the chance, but she was found out and almost killed. She took two more opportunities to perform undercover work, and neither worked out. In the final one she was betrayed by one of her colleagues, Erkuurshiku Muruju, who leaked her name to the faction she was meant to be infiltrating, just so another team could improve their own infiltration efforts.

She survived, and spent the next few years trying to uncover who had been ultimately responsible for the decision. She tracked it back to a high bureaucrat named Nazur Jijarsi Majiija. She had been playing the various law enforcement teams against each other for her own benefit. Umne had no proof however, and was forced to flee the world with the help of some of the insurgents she had been trying to infiltrate. In exchange for intelligence, they set her up with enough resources to get off world and to safety.

Fails to get into the Merchant Academy