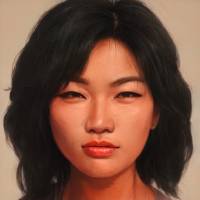 Ushle Ujarii is a small dark haired woman in her late thirties, who nevertheless looks to be well muscled and fit. She is rather scruffy, and seems to be good at fading into the background.

Ushle Ujarii was born on Tobia, and identified as having strong psionic talent when she was young, and taken in to be raised by an underground group of telepaths. However, she was brash and hot headed, and often clashed with those in charge who she considered to be dumb and stupid. When it came time to graduate, she was pushed aside by the leader of the group, Ijer Adarmiku.

She took to surviving on her own, something she turned to be quite capable at, working with a gang of street thugs and turning them into a more civilised band of scam artists and blackmailers. It's much easier to blackmail people when you can read their thoughts, and with a team to get the physical proof they made a good living for a couple of years. Then they tried to blackmail the wrong person, and the local security forces cracked down hard. She and her gang were rounded up and she spent the next three months in jail.

Ushle was able to subtly use her powers to survive amongst the gangs and eventually got released early because she knew exactly what to say and to whom. As soon as she was out, she teamed up with a small starship crew for a while, and made friends with an Aslan engineer.

She continued to try to get back in with the other telepaths, but was repeatably pushed aside, something that caused her to resent them more rather than modify her behaviour. She drifted from world to world, picking up a job as a mechanic on Gor due to her knowledge of advanced technology, and learning to scrounge broken parts on Imisaa in order to sell them to shops.

After almost ten years of trying, she was finally accepted back into the telepath community over the objections of Ijer Adarmiku, and was inserted into a mercenary group led by Major Memmula Khapikuu. She and Ushle got on well, and though her tour of duty is over they've agreed to keep in touch.

This is my first attempt to build a Psionic character, and I probably got a few things wrong. This being Traveller, it doesn't matter too much.

I did decide that it made sense for her to be able to try and join the Psion career after leaving the Psionic Community, but she failed most times she tried. It has been pointed out that Graduation from this pre-career gives you automatic entry into the Psion career, so I got that wrong. But it still makes for an interesting character, so I'm leaving it as is.

Since I tried to leave this 'career' each term, I guess that I should have rolled for benefits after every term rather only after actually succeeding on leaving it.

Finally made it into the career.