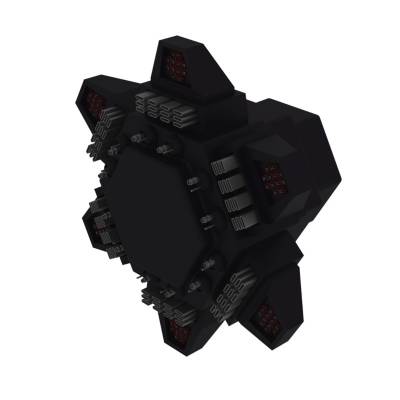 Web Spinner is a human name for the I'Sred*Ni missile frigate, designed to get in close and overwhelm the enemy with missile salvos. When they began incursions against the Stormhaven Republic, they used large numbers of nuclear missiles. However, the massive point defences of the Stormhaven ships which were designed to counter this, and later nuclear damper technology, meant they have switched to multi-warhead missiles in an attempt to overwhelm enemy defences.

The I'Sred*Ni are less reliant on computer systems than many human polities are, and their larger ships lack a large computer core and many of the advanced software packages which might be expected for ships of their technology level. However, they have a natural gift for mathematics, which partially makes up for this.

I'sred*Ni are also telepathic, and have a group mind of sorts, which greatly improves communication throughout the ship.

The turrets are double turrets, which mount a single beam laser (Long Range) and a plasma gun. They can't both be fired in the same round, but tend to switch between point defence and anti-ship rolls as needed.

I'Sred*Ni get a +1 bonus when using Gunner and Electronics skills.