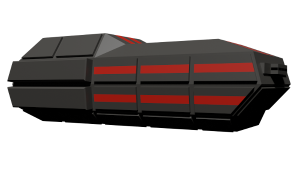 The 12,000t Paagdinnika class from General Products is a fast cargo hauler designed to carry large amounts of cargo long distances. It is a close structure design, little more than a 120m long box with drives attached to one end. However, it's known for its no-frills reliability which makes it a favoured workhorse when its talents are required.

It's biggest weakness is actually it's strength - Jump-4 isn't needed that often, so there was always a risk that nobody would be interested in buying such a capable freighter. So its main fuel tanks are divided into thirds, allowing it to be sealed off and used for extra cargo storage if required.

The Paagdinnika has very good automation, and is laid out in a way that makes the internal systems easily accessible, reducing the crew requirements significantly. Staterooms are setup for double occupancy, except for five for the Captain, Medic, Officer, Pilot and Astrogator.

It is traditional for the Captain to take on the role of secondary pilot, and for the officer to also be trained in astrogation. Administrators take on most of the broker role.