You are here: Gaming and other Nonsense » WorldGen » Jump Masks and Shadows 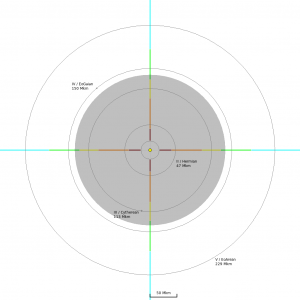 A Jump Mask is the region around an astronomical body that prevents FTL jumps due to the gravitational field. In classic Traveller, a jump mask is 100 diameters of the object. However, this breaks for highly massive objects such as white dwarfs or neutron stars, since they will have very small diameters, but a gravitational field equivalent to a main sequence star.

For this reason, WorldGen has an option to use the gravitational field strength rather than the diameter of the planet or star when calculating the jump mask. Both the diameter multiplier to be used, and the strength of the gravity, can be configured.

One problem with using the gravity strength, is that it's not possible to be consistent with Traveller for both planets and stars. If it is set so that an Earth-like planet has a jump mask of about 100 diameters, then the mask for a Sol-like star will be larger (and actually becomes greater than 1 AU).

If it's set to be consistent for a Sol-like star, then it will mean the mask around an Earth-like planet will be less than 100 diameters. The default is for something lower, so that Earth isn't within the jump mask of Sol. 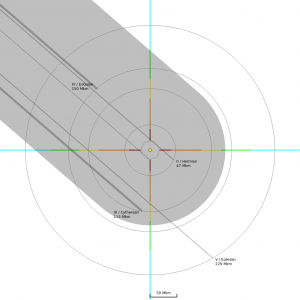 The jump shadow includes regions of the system obscured by the presence of a jump mask. It isn't possible to jump directly across a jump mask, so even a mask extends 1 AU around a star, even if you are 2 AU from the star you can't jump to a point 2 AU on the direct opposite of the star since it will be in shadow.

A ship will need to move around the system in order to get a clear line of sight. This also means that when jumping in from another system, parts of the destination will be in shadow, meaning it may not be possible to jump directly to a planet if that planet is currently in the part of its orbit that puts it on the other side of the star.

WorldGen can work out such shadows from the point of view of neighbouring systems, and show which parts of a system can be jumped to directly, and which can't. 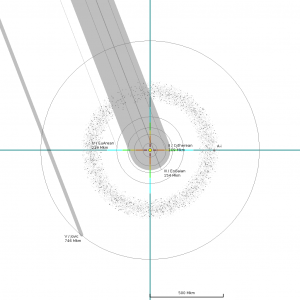 It is currently assumed that asteroid belts have no effect on jump masking. This may change at a later point.