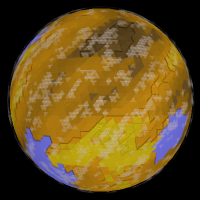 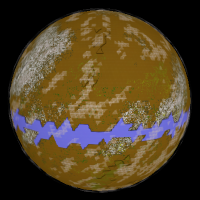 Within a billion years, EoArean worlds rapidly cool and settle into a MesoArean stage. The atmosphere may still be reasonably thick, but won't stay that way for long. As the atmosphere thins, so any surface water will evaporate and oceans will begin to dry up.

Sometimes complex life will form, but rarely develops beyond the oceans or basic lichens and mosses on the land.

This stage can last as little as a hundred million years. If the world manages to maintain geological processes that keep the atmosphere topped up, then it becomes an Arean-Lacustric. If it is too close to its star, then it may become an AreanXenic. Normally however, the atmosphere thins, the seas evaporate and it becomes a cool Arean desert world.

Similar to EuArean, with the addition of surface water and a thicker atmosphere.