You are here: Gaming and other Nonsense » WorldGen » Planetary Classification List » Proto Gelidian 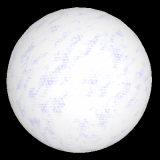 Since they form in the outer reaches of a solar system, they can retain their atmospheres for longer. These often consist of water vapour, surrounding a shell of ice or even liquid water. A crust of ice will freeze first, leaving sub-surface oceans surrounding a rocky core. Over time, as heat is lost to space, the world will freeze solid.

The atmosphere may be of water vapour, or other gases such as methane or ammonia, depending on the exact composition of the material making up the world.