You are here: Gaming and other Nonsense » News » Vault of the Drow

Vault of the Drow 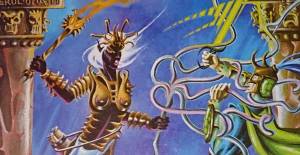 We have finally come to the end of the D&D 3.5 campaign I started over two and a half years ago. Starting at 3rd level, initially just as a short adventure to try out the online tabletop idea, it's seen the party climb up to around 28th level, giving the Epic level rules a try out. In the final battle against the servants of the Spider Queen, nobody died (though a couple came close).

Originally set in the Hestmark Highlands of the World of Greyhawk setting, and initially going up against the machinations of the Scarlet Brotherhood, it ended with a delve into the underdark, as I ran everyone through a somewhat high level version of D1-3 (the classic 1st edition AD&D adventures going up against the Drow). These are some of the earliest adventures I ever bought (I also have G1-3, and Q1, but I ran people through G1-3 shortly after 3rd edition first came out), so it was good to finally make use of them. I have tried two aborted campaigns using them before, but previously nobody ever got past D1.

I've decided definitely against continuing the campaign into Q1 (Queen of the Spiderweb Pits). Though it might be interesting, I'm sort of burned out from coming up with challenges for a party of Epic level adventurers that doesn't simply TPK them.

Things I learnt: Epic rules are broken. The Book of Exalted Deeds is really broken (but at least I've now got to use all the books I bought 15 years ago and never used). Letting players buy whatever equipment they have money for is also something I'd like to avoid in the future. Since the game started as a simple dungeon bash where I didn't want to worry about what happened in downtime, there were a number of well optimised characters that could be very difficult to touch without bringing in encounters designed to exploit their weaknesses (which, from a realism point of view I don't like doing too often).

Having said that, it wasn't a cake walk for the party, and there were plenty of deaths (which became a very temporary thing once the cleric gained access to True Resurrection) as well as close calls, but they all managed to avoid any TPKs.

Roll20 worked very well as a virtual tabletop platform, though it was heavy on the macro programming and API scripting (something myself and several other players had no problem with, since we've done this sort of thing as our day jobs). For the less technically interested, it was a pain. However, we started long before Roll20 had support for character sheets, which abstracts away the need for a lot of this, so hopefully our next game will we somewhat easier to manage when we're able to take advantage of all the new features.

In terms of a next game, I'm planning on starting a low level Pathfinder game set in the city of Magnimar. I intend this one to be a lot less dungeon bashing, with more focus on the implications of what people are doing, with a bit more politics and social complications than the D&D game had. Since I prefer Pathfinder to any of the D&D versions, this was probably also the last game of D&D I'll run (though I did think that back in the early '90s when I converted by 2nd Edition game to something else).