You are here: Gaming and other Nonsense » News » Asteroids 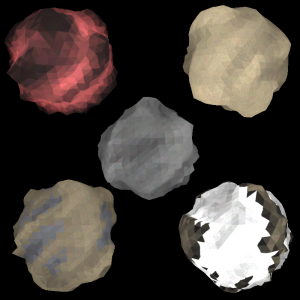 As part of fleshing out basic planet types for WorldGen, I've been working on generating maps for five different types of asteroids. For the most part they share the same basic framework - a texture map, plus a deformation map which gives them their shape. All the bugs where the texture didn't link directly at the edges have been fixed, so they actually look like solid objects.

Most of the time has been spent with the colours. Silicaceous (top right) and Carbonaceous (middle) were the simplest, with relatively consistent textures across the surface. Gelidaceous asteroids (bottom right) are comprised of rock and ice, so have a mix of textures. Metallic asteroids (bottom left) have a high degree of metals.

The final type, Vulcanian (top left, and actually called Vulcanoidal in the original Planetary Classification List, but I've renamed them to give them a different name to the class they belong to) are special in that they're found close to their star, so can be incredibly hot. There're several versions of these, depending on how hot they are - what is shown is a middling Vulcanian type which is hot enough to glow red.

Some have a few extra options to give individual asteroids a bit of uniqueness, and I'll add to these as time goes on. For now though, there's probably enough detail to move on to providing extra detail to larger worlds.