You are here: Gaming and other Nonsense » News » Pathfinder Tabletop 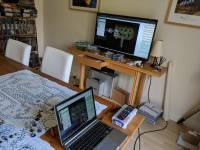 For the running the fifth chapter of Rise of the Runelords, I've turned to a mix of tabletop and virtual environments to manage things. Though I have all maps, monsters and NPCs managed within Roll20, as far as the players are concerned everything is running on the real table. Maps are done using cardboard tiles from Role 4 Initiative, with (mostly plastic) figures for the PCs and monsters. Where everyone is is determined by the tabletop map, and this is considered the single source of truth. Anything I have in Roll20 is merely for my own benefit (and keeping track of things that the PCs can't see yet).

Roll20 is managed from my Chromebook (used in preference to my laptop, since it can happily last all day without needing to be plugged in), which is also connected to the TV via HDMI cable (I did start off using Chromecast for screen mirroring over a wireless connection, but that turned out to be unreliable).

The only feature that is run from Roll20 from the player's point of view is initiative, which is displayed up on the TV. Players also get to see the output from my API scripts, which will report when a creature is down to two thirds or one third hitpoints, so they have some idea of how badly injured creatures are. 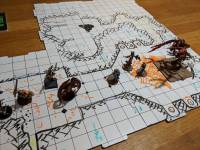 All my dice rolling is controlled from Roll20, which saves me time as GM. However, players roll using real dice on the real tabletop (though occasionally they'll ask me to make a roll for them, when they need to roll buckets of dice for a large spell or sneak attack for example). This helps keep to the 'real' feel of playing a tabletop game.

Most monsters/NPCs I have the right models for (an exercise that turned out more trouble and expensive than I expected, so I will probably drop this for future adventures), so I don't need to display pictures of things to the players, but when I do I can do that via the TV. Due to the layout of the room, the TV is behind a couple of the players, so it's not ideal and I try to avoid putting things up for display on there whenever possible.

Actual handouts are still done on printed bits of paper, so that players having something to hold and read.

None of the players are actually part of the Roll20 game itself, so apart from a few statistics (Perception, Sense Motive and Initiative) I have very limited PC information digitally. Most players prefer to use NPC Gen anyway. We could potentially try using Roll20 for video if a player couldn't make it, but we haven't had to do that yet.

We're most of the way through Sins of the Saviors now, and it's running reasonably smoothly. I would prefer to be able to draw out more maps up front in preparation for each game, but the last part of the adventure is difficult to predict where players are going next, and I don't have enough map tiles to be able to draw out all the maps (especially since some are pretty huge) at once.