You are here: Gaming and other Nonsense » Full Thrust » Scandinavian Federation » ScanFed Fleet

The Scandinavian Federation is one of the minor powers, with only a small fleet. 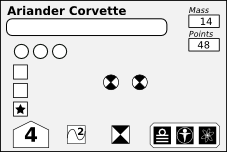 Class: Corvette (CT)
Mass: 14
Points: 48
The Ariander corvette is a light ship designed for patrol and light escort duties. It is slow for its class, but well armoured, though not designed for full scale combat. It carries an area defence fire control system and two point defence lasers, making it most effective against fighters, but also capable of taking on other small ships to a limited extent. Though it is slow, it is normally restricted to keeping close to even slower transports, so its limited speed is not seen as a problem in practise. 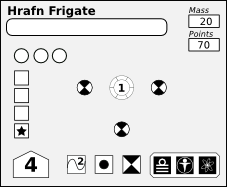 Class: Frigate (FF)
Mass: 20
Points: 70
The Hrafn frigate is a common ship in the Scandinavian fleet. Cheap to produce, it is the front line defence against pirates and other opportunistic raiders. Like all ScanFed ships, it is heavily armoured with a light hull. Equipped with both full fire control systems, as well as area defence systems, it is more capable than the smaller Ariander at challenging light combat vessels. Since it is normally used in escort duties, its slow speed is not normally an actual liability. 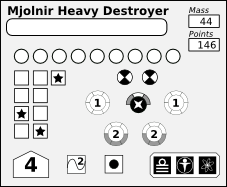 Class: Heavy Destroyer (DDH)
Mass: 44
Points: 146
The Mjolnir class of heavy destroyers were the first destroyer class ship to see service in the ScanFed navy. Encased in armour, and carrying a pulse torpedo, and two each of class 2 and class 1 beam batteries, it take take considerable damage, and give it out as well. However, it sacrifices speed and manoeuvrability. 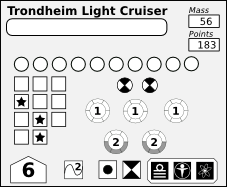 Class: Light Cruiser (CL)
Mass: 56
Points: 181
Designed for rapid response, the Trondheim class of light cruiser is one of the ScanFed's most common ships. It can be deployed quickly to where it is needed, reducing the need to have them everywhere. It has moderate armament, and like other ScanFed ships, is very heavily armoured. It is also equipped with area defence systems, allowing it to take on any fighters in the area. However, this means that it only has a single anti-ship fire control system, limiting its options in ship to ship combat. 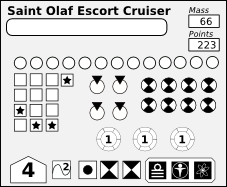 Class: Escort Cruiser (CE)
Mass: 66
Points: 223
The Saint Olaf class of Escort Cruiser is ScanFed's principle area defence ship. It is fast, allowing it to move to cover other ships quickly, and has a heavy layer of armour around a fragile hull (as is standard for all ships of the Federation). It is lightly equipped with anti-ship weapons, though does carry four submunition packs. 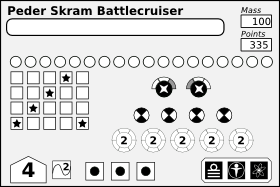 Class: Battlecruiser (BC)
Mass: 100
Points: 335
The Peder Skram is a Battlecruiser designed for fast offence. It is equipped with five class two beam batteries, as well as two front facing pulse torpedoes. Unlike many of the ScanFed's capital class vessels, it has good all-round capability.