The One Time is a huge, sprawling, meta-culture of civilisations linked together by the Wormhole Technology that make faster than light travel possible. It's not really FTL, but in the sense that it allows travel between star systems, or even galaxies, within mere moments, it's as good as. 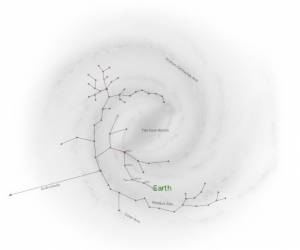 One thing that becomes immediately apparent is that life, or at least advanced forms of life, is terribly sparse. There may be a few technological civilisations native to a single galaxy, though many galaxies have but a single one, and the majority seem to be barren of such civilisations.

Life, in the form of bacteria or simple organisms is much more common, and each galaxy may have hundreds of millions of worlds which support such basic life. Multi-cellular life is less common, being found on millions of worlds, and the equivalent of plants and animals are generally only on a few thousand worlds of a typical galaxy. In volumes where civilisation can be found though, terraforming is common, and many worlds can be adapted to support advanced life - of a sort.

It is thought that the culture that started it all was that of the Yi'klari. Little of them is known, but they existed between 9 and 10 billion years ago and may have been a Type III civilisation at their height. They discovered a way to create stable wormholes, and with this technology began the colonisation of their galaxy, and then other galaxies 'shortly' afterwards. The use of wormholes makes talking about time difficult. As their empire spread, so time within the wormhole network was fixed. It may take millions of years to bridge the gap between two galaxies, but only a few decades may pass within the One Time. Though the network was first created almost ten billion years ago, it is estimated that less than a million years has passed within the One Time itself.

Map of the Milkyway Galaxy