You are here: Gaming and other Nonsense » Pathfinder » Experience

The medium experience progression will be used. However, experience will not be gained for killing monsters. Exact details are still being worked on, but current ideas are sketched out below.

The general aim is that experience gain will be relatively slow (I do plan to use the partial level advancement from Pathfinder Unchained), but more importantly it will be flatter than standard. Rather than the flat ~dozen encounters to go up a level, regardless of level, progression at higher levels will slow down.

For set missions, there will be an experience award based on success. For example, a mission to break into a house and swap some item for a fake, without being noticed, might give:

Total experience would be given to everyone who took part.

So what happens when characters decide to go an do their own thing, rather than a set mission for an NPC? Experience would be gained, in a similar way, though objectives would be decided by the GM.

My very rough thought is that advancement will initially progress at around a level a month (~500XP/session). The amount of XP gained may increase over time, but probably not much beyond 1,000 XP for a good session.

Considering the possibility of giving experience for gaining influence with various factions. Since factions will probably be an important part of the game, this should tie in nicely. 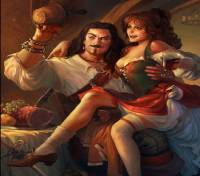 Experience may also be gained for spending money on really important things - drugs, sex, entertainment and fine living. Basically anything that doesn't give you in-game benefits. The idea here is to emulate fantasy such as Conan or Fafhrd and the Gray Mouser. Money is easy-come, easy-go.

Wizards and Clerics would be allowed to spend money on lab experiments and donations to their church. hat happens to the money isn't really important, just the fact that it is expended for no other benefit than experience points.

The current plan is 1gp = 1xp. This would be on a per-character basis.

For characters who aren't doing anything, they'll gain 100gp/month from 'unspecified activities'. This can be used to gain XP, or purchase equipment.