The Physics script is designed to provide aid in calculating basic things such as information on planets, or plotting travel times. It's not specifically tied to Traveller, but was written with that game in mind. As with my other scripts, it is available on GitHub.

The !physics command takes a sub-command and a number of arguments. It can be shortened if desired, down to !phy to save on typing. There are three sub-commands - thrust, rocket and planet.

The sub-commands can be shortened to the shortest unique word, which current is a single letter for all of them.

The thrust sub-command uses the equation of motion to calculate how long it takes to travel a given distance under constant acceleration.

If 'g' is not specified on thrust, then acceleration is assumed to be in ms-2.

The distance is assumed to be kilometres unless other units are specified. km, mkm (millions of kilometres) and au (astronomical units) are supported units.

The rocket sub-command will use the classical rocket equation to calculate the delta-vee for a rocket. This isn't used much in Traveller, but it's there in case it's needed.

It takes the wet and dry mass of the ship (units aren't important, since it's only the ration that matters), and the Isp (specific impulse) of the drive (in seconds).

Can be used to display some basic statistics about a planet.

The simplest command can be used to calculate statistics for a planet.

Displays statistics on a planet with a radius of 6400km, and a density of 5.5g/cm³. It will display the planet's mass, escape velocity and surface gravity.

You can specify different units, for example you can use 'e' for Earth, 'j' for Jupiter or 'sol' for Sol. You can also specify, m (metres), km (kilometres), mkm (millions of kilometres) or au (astronomical units). 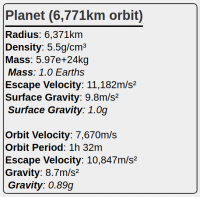 Another option is to specify an orbit. If a third parameter is specified, then it is the distance to an orbit, which by default is from the centre of the planet. To specify a 7,000km orbit around a 6,400km radius planet you would use:

Alternatively, you can specify an orbit as an altitude by using +<altitude>. 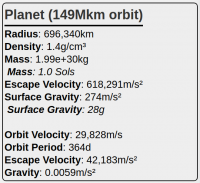