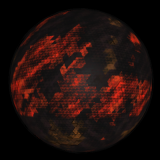 These are similar to Proto Lithian worlds, in that they are small young worlds still in the process of forming. They are carbon-rich worlds, often dark rock mixed with glowing lava flows. The frequently churning surface brings crystals and exotic compounds to the surface, before swallowing them again in a process that only ends once the world cools enough for the core and mantle to freeze solid.

They are more common than Proto Ferrinian worlds, found around massive stars.

Such worlds may have a thin atmosphere, but once the process of formation has ceased it will be lost to space within millions of years.