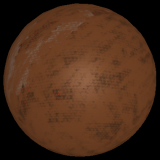 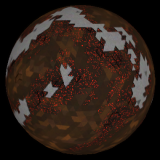 A Proto Lithic world is a young terrestrial world that is still hot from creation. There are similar in many ways to Proto Lithian worlds except for being larger. They have a thick hydrogen atmosphere, and a molten or partially molten surface. They are incredibly geologically unstable.

They may have seas or lakes of liquid metal, and tend to provide easy access to resources that are normally locked up in the world's core. Unfortunately, the conditions make mining such resources difficult.

The atmosphere of these worlds tend to consist of mostly Hydrogen with Helium, similar to the components of the original gas cloud from which the system formed.