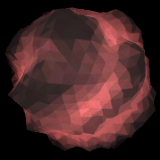 Vulcanian asteroids are hot rocky objects high in metals and other heavy elements. They are generally found close to a star. Due to excessive solar heating, some may glow red hot, or even be molten.

They are too small to sustain an atmosphere, but the hotter ones may have a 'atmosphere' of metallic gases that is continuously being lost to space, and replenished from the surface.

Such worlds rarely have an atmosphere. Sometimes they will have the barest minimum of a trace of Exotic elements (mostly silicate or metallic vapours). Rarely, this can be shaped by a magnetic field.