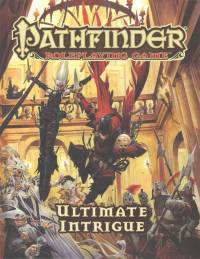 I'm bringing the current run of my Pathfinder campaign to a break point, and I'm ending things with a bit of a party. The PCs have been invited to a 'house warming' being given by a new noble family recently arrived in Magnimar from Kintargo, in Cheliax. Obviously, they are worshippers of Asmodeus, but you shouldn't hold that against them.

I'm making heavy (possibly too heavy) use of the Influence rules in Ultimate Intrigue, and giving the PCs a chance to talk to various NPCs using the rules for discovery and influence. There's nineteen different NPCs they can talk to, plus a generic 'servants' group they can talk to.

Rather than 'influence' providing influence over an NPC, I'm using it as a means to gather information from the NPC. Each level of influence provides more information. For example, here's Lady Sila Crusca:

Lady Sila is the wife of Lord Malchus Crusca. She is in her fifties, with long white hair. She is wearing a velvet green dress, threaded with gold and silver.

She is known to have had a relationship with Lonjiku Kaijitsu, and gave birth to his daughter Amaya Kaijitsu who now lives in Westcrown. She is enjoying the food and drink, as well as the gossip, which she seems to take part in using multiple languages.

The rules in Ultimate Intrigue set the DC of skill checks based on the average party level. I'm basing it on the NPCs level (10 + level). This makes some a lot easier to influence than others.

One of the first things that can be discovered about her is her alignment and character classes. Not all NPCs are so easy to find such things out about (some may give inaccurate, or incomplete, information for the first level or two of influence, especially those who are multi-classed).

Some of the NPCs give bonuses to influence other NPCs. So in the case of Lady Sila, she grants a +2 bonus to influence her husband as one of her influence benefits. The bit about the shipwreck is a possible adventure hook, and possibly a clue for a previous plot point they've been sitting on for a while. Her very last benefit is providing a reputation bonus to the Aristocrats faction.

Part of the aim is to figure out who can be spoken to, in order to get information and bonuses to make the harder NPCs easier to influence. Some of the PCs have quite high skills in some areas, which is turning out to be really beneficial for them.

I'm running the evening's events from 8pm through to midnight (when they know they have a special meeting with the head of the family). So far they are up to 9:30pm, and have fully 'unlocked' 3 of the NPCs. They are very unlikely to be able to talk to and find out all the information possible over the course of the evening.

The mechanisation and gamification of the interactions with the NPCs has worked quite well so far, making things a lot more tactical. Rather than just “I'll talk to Lady Renova and make a Diplomacy check”, there's more tactical planning involved.

In order to gamify things further, I've added in some extra options of what the PCs can do of my own. I'll cover them in the next post.