You are here: Gaming and other Nonsense » News » Gaming Plans for 2019 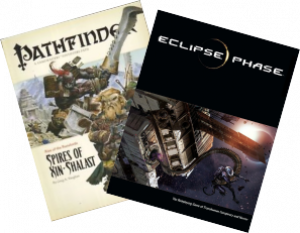 For the coming year, I'm hoping to finish at least one Pathfinder Adventure Path, and also to get in some science fiction gaming with Eclipse Phase.

On the initial front, I'm going to bring my Roll20 based game of Pathfinder to a pause. I was hoping to get it completed before the Christmas break, but various social events prevented that. There's possibly one, maybe two sessions of that before it comes to a good break point. Pausing that will allow me to take a break from GMing for a bit. Whether we fill that time slot with something else (last time we did some Delta Green) I don't know.

For our weekly tabletop session there will be more of our Strange Aeons game. When that pauses, possibly in March, I'll pick up on Rise of the Runelords for the last time, and finish off chapter 6 The Spires of Xin-Shalast. That will be the first adventure path that any of our groups have completed. It's taken about 5 years to get to this point, so it'll be good to reach completion. I've started looking at prepping it now, since there's a chunk of it which is pretty lightly detailed, and I want to flesh it out a bit.

After that, I'd like to run some science fiction, and I have Eclipse Phase in mind. I'm currently toying with some adventure ideas, and I've been reading through the 2nd edition rules. Hopefully the new edition will be complete in time for me to run a game based on them. I really like the background to Eclipse Phase, but the rules felt clunky and over complicated (says the Pathfinder player). Possibly this will get done during the Summer.

There's been some discussion about what people want to do next in our groups, and I'm tempted to run the Iron Gods adventure path much later in the year. Basically, it's Pathfinder fantasy with robots and laser guns. If it works, it could be a lot of fun.

Other than that, we'll be continuing Serpent's Skull during our monthly sessions. That is currently in the fifth chapter, so maybe we'll get to finish that next year.