The core FSE fleet relies on a mixture of speed, fighters and salvo missiles. With the exception of the Richelieu class heavy carrier, no FSE ship has a thrust less than four. This high manoeuvrability is effective in both attack and defence, and even the capital ships can be hard to accurately target with salvo missile fire.

The Tourville Heavy Cruiser is the mainstay of the fleet, being a good general purpose combat vessel, with a high speed combined with long range.

FSE fighters are noted for their great speed and manoeuvrability. All fighters are fast, and in addition may have one extra characteristic.

Class: Scout (SC)
Mass: 8
Points: 26
A small FSE scoutship designed to operate my itself deep behind enemy lines. It carries a submunition pack which enables it to hit with a somewhat heavier punch, but it is one shot. 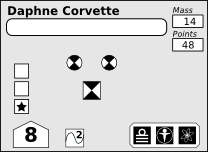 Class: Corvette (CT)
Mass: 14
Points: 45
The Daphne class of corvette is designed as a light escort ship, capable of protecting a small convoy. However, it is lightly armoured and has only seen limited use. 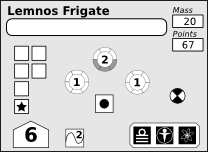 Class: Frigate (FF)
Mass: 20
Points: 67
The Lemnos class of frigate is the FSE's smallest warship designed specifically to take on other warships. 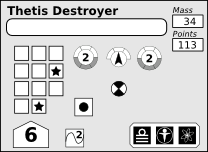 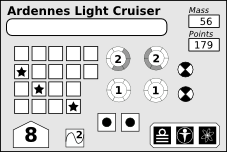 Class: Light Cruiser (CL)
Mass: 56
Points: 179
The Ardennes class light cruiser is a fast cruiser with a limited array of weaponry. It is one of the fastest ships of its class though in any navy. 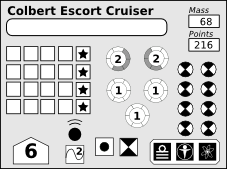 Class: Escort Cruiser (CE)
Mass: 68
Points: 216
The Colbert class of Escort Cruiser is designed to be able to soak up a large amount of punishment whilst protecting the ships in its care through use of area defence systems. It is the smallest of the FSE vessels to carry shields. It's weakness is that it has only a single standard fire control system, so cannot engage multiple warships at a time. 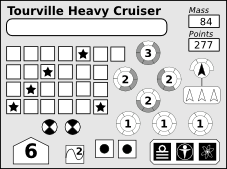 Class: Heavy Cruiser (CH)
Mass: 84
Points: 277
The Tourville class of heavy cruisers carry a large array of weapons for neutralising targets as quickly as possible. With both class 3 beam weapons, and a salvo missile system, it can out range most ships of equivalent or smaller size. It has been known to carry two ER salvo missiles rather than the usual three standard missiles. This change does not affect ship cost. 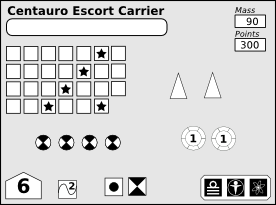 Class: Escort Carrier (CVE)
Mass: 90
Points: 300
The Centauro class of Escort Carrier is the FSE's answer to the new breed of cruiser class carriers. Designed for an escort role protecting civilian conveys, it is capable of placing two flights of fighters into combat. It also carries area defence systems for providing its own anti-fighter cover to the escorted fleet. 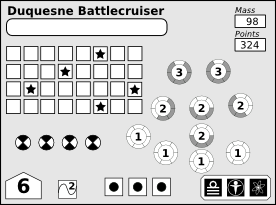 Class: Battlecruiser (BC)
Mass: 98
Points: 324
The Duquesne Battlecruiser is the smallest of the FSE's capital class ships, and is still capable of high thrust. Equipped entirely with beam weapons, it is designed to be able to deliver repeated attacks onto the enemy where it is most needed, without having to worry about ammunition. 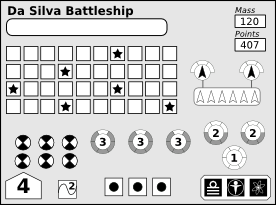 Class: Battleship (BB)
Mass: 120
Points: 407
Loaded with six salvo missiles, the Da Silva Battleship is capable of laying down an impressive amount of firepower, though it is limited to launching only two at a time. However, its three class 3 beam weapons make for an effective 'secondary' source of fire power. Designed to combat enemy vessels at medium to long ranges, it relies on fighter and escort cover for close defence. 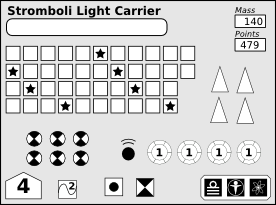 Class: Light Carrier (CVL)
Mass: 140
Points: 479
The smallest of the capital class carriers, the Stromboli is a cheap solution of providing fighter support to smaller patrol fleets. It is still capable of acting as a command and control vessel, but has relatively light defensive systems if it comes under attack itself. 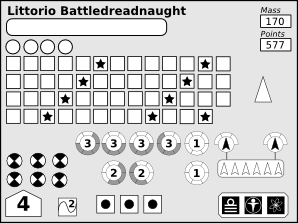 Class: Battledreadnaught (BDN)
Mass: 170
Points: 577
The Littorio Battledreadnaught is a multi-role vessel, capable of fielding fighters, laying down salvo missiles and also with a good balance of beam weapons. 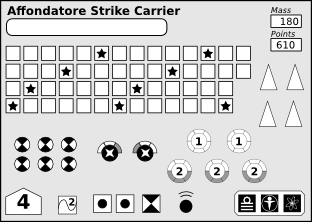 Class: Strike Carrier (CVS)
Mass: 180
Points: 610
The Affondatore Strike Carrier is halfway in design between a Superdreadnaught and a Heavy Carrier, though is considerably smaller than both. A less favourable way of describing it is as a heavier version of the light carrier. It is capable of carrying twice as many fighters as the Charlemagne Superdreadnaught, and carries a reasonable array of weapons compared to the Stromboli Light Carrier, including two pulse torpedo systems. 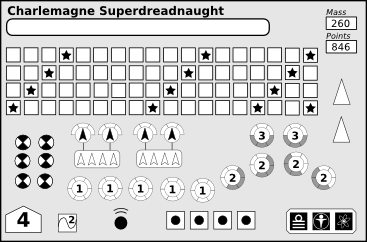 Class: Superdreadnaught (SDN)
Mass: 260
Points: 846
Equipped with four salvo missile launchers, as well as numerous beam weapons, the Charlemagne Superdreadnaught is designed to be able to deliver catastrophic damage to a single target, overwhelming any defences that it may have. It is one of the few FSE vessels equipped with shields, and also carries a fighter group, mostly for defensive or scouting roles. It is rarely seen without at least one dedicated carrier and a Colbert Escort Cruiser assigned to it however. 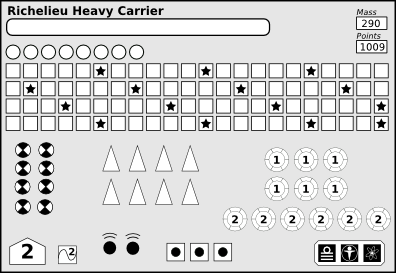 Class: Heavy Carrier (CVH)
Mass: 290
Points: 1009
The Richelieu Heavy Carrier is a departure from normal FSE doctrine in several ways. It is the only FSE ship that has a thrust lower than four. It also has two levels of shields, as well as heavy armour. It also carries a wide array of short to medium range beam weapons, so it can defend itself without having to rely on escorts. The principle armament however are the eight flights of fighters that it carries. 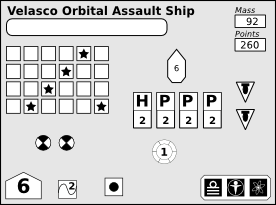 Class: Assault Transport (TA)
Mass: 92
Points: 260
The Velasco is designed for supporting a planetary assault. Equipped with two ortillery systems for providing space to ground fire support, it also has a hanger capable of carrying a heavy shuttle, as well as crew quarters and workshops for troops and ground vehicles. 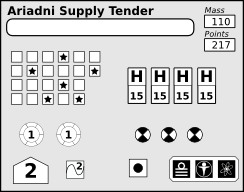 Class: Transport (TT)
Mass: 110
Points: 217
The Ariadni is the standard supply transport for the FSE fleet, capable of supplying spare parts, food and ammunition to a fleet on deep patrol. It has limited defences itself, and normally relies on escort vessels if operating near to enemy space.