A Star System is a collection of stars and planets that inhabit a parsec hex on a sector map. A star system may have zero stars, in which case it will most probably consist of a rogue planet. Star system maps display the orbits of the planets in the system, as well as the current position of the planet for the given time. 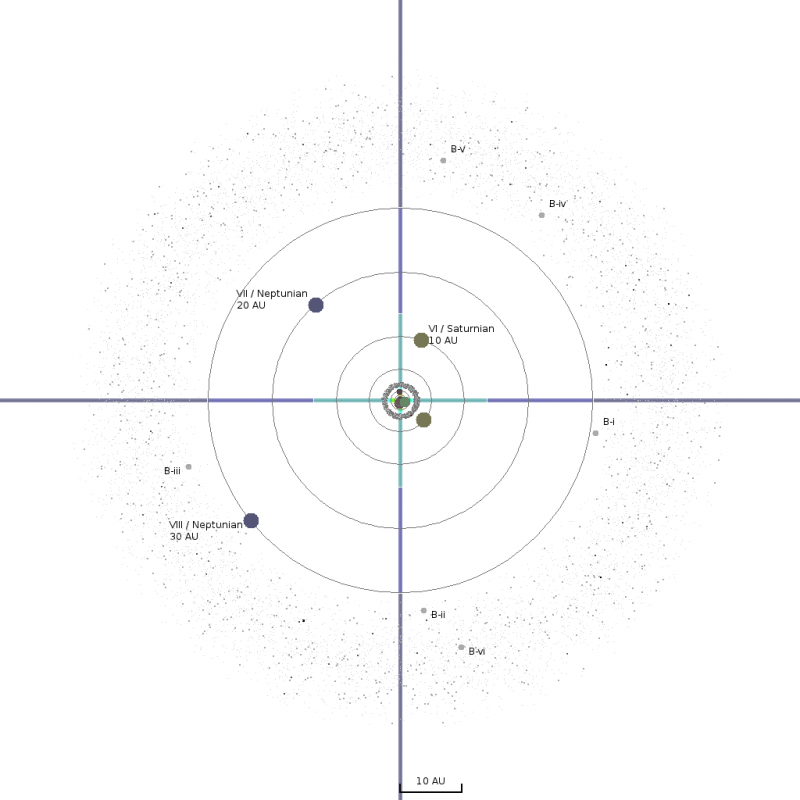 Note that planets are not shown to scale, since otherwise they wouldn't be visible. Optionally, it is also possible to display jump masks and shadows.

Star systems are defined by broad types, which define the orbital arrangement of any stars in the system. Categorising systems in this way makes it easier to define their behaviour, especially the stellar orbits. It also provides a quick way to understand a system.

An empty system has no stars or planets. Generally these won't be defined in the database.

A single star with zero or more planets. These are the simplest functional star systems. They are often surrounded by distant Oort clouds, which completely enclose the system in a globe made up of trillions of icy comets. Given the scales of these, ranging from thousands of AU to as much as 100,000 AU, they are not currently shown on any of the maps.

A conjoined binary consists of two stars that are close enough that their atmospheres are touching. These are quite rare, and can lead to an unstable system due to frequent solar flares of extreme magnitude. Though planets can orbit both stars at a distance, they are unlikely to be able to support life.

Such stars are often asymmetrical, with one being significantly more massive than the other. Some though consist of matched pairs.

Conjoined binary systems are gravitationally similar to a single star system, and may have a similar distribution of planets and outer ice rings.

A close binary has two stars orbiting within 1 AU of each other. The stars are not touching, but they are close enough that it is possible for planets to orbit both stars. Any planet will tend to be at least ten times the distance between the two stars.

This often means that there are no planets in the goldilocks zone of the system, since it is too unstable for planets to remain so close to the stars. Instead, the system will consist of colder, icy worlds well beyond the snow line.

A medium binary has two stars between 1 AU and 100 AU of each other. They are not close enough for planets to orbit both stars, but planets could orbit each star, depending on exactly how far apart they are.

Such systems don't have kuiper belts, since the orbit of the stars tend to disrupt the formation of any icy belts that far out. Most planets will be within a fifth of the distance between the two stars, a third at most. This may limit the formation of ice giants in the outer parts of the system.

The inner system can have a higher than normal distribution of comets, due to the destabilising effect of the two stars on any oort cloud.

A far binary has both stars significantly far from each other, more than 100 AU. In such cases the other star may not be recognised as a sibling by people on a planet on the first star, at least until they achieve a suitable level of astronomy.

If such binaries haven't disrupted the formation of Oort clouds, they tend to have a destabilising effect that causes the inner system to suffer a lot of cometary impacts from comets pulled in from the outer system.

The regions within a solar system are split into zones based on their proximity to the star. This dictates the type of planets that may be present.

The circumstellar zone is displayed on the axis, from red (too hot for planets) to dark purple (frozen outer system), with green for the goldilocks zone. The system can be displayed at different scales, since when the outer ice belts are included, the inner system is often little more than a few pixels. 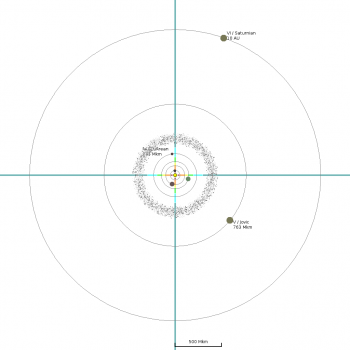 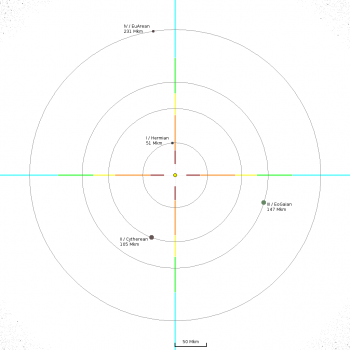