You are here: Gaming and other Nonsense » WorldGen » Planetary Classification List » EoArean 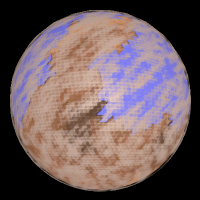 Similar to EoGaian worlds, EoArean are Arean worlds early in their development, before their atmosphere and any geological activity has stabalised. They are hot, volcanic worlds, possibly with an ocean. They are inhospitable for humans, and represent the stage before an Arean world cools enough to be hospitable.

Whereas a Gaian world may last for the good part of a billion years in its EoGaian phase, EoArean worlds settle down into the MesoArean phase much quicker, within a few hundred million years. Being a smaller world, it cools much quicker and once the geological processes have stopped the atmosphere begins to thin quite quickly.

Similar to EuArean and MesoArean, with the addition of surface water and a thicker atmosphere.

A metallic core is still molten, and may still have a weak magnetic field.

Atmosphere will tend to be Thin or Standard.

Base Organics (if life)