In the 33rd year of his reign, Cerdic, brother of Oswulf, son of Centwine and the King of Lanuch gave to the priest Embryt of Haltan the charge of recording the doings of the people of Lanuch, and to write them down such that they become a true history for the grandsons of the grandsons of the royal line.

And so, at a small temple near the village of Habisfern, was begun a written record of the People of Rorn. Over the years, this history came to be known as the Habisfern Scrolls and grew to cover a much larger region than the fledgling Kingdom of Lanuch. 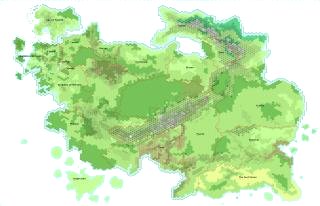 The Habisfern Campaign is set in the Kingdom of Weidany, which is one small part of the continent of Euressa. It is a land of fallen kingdoms, untamed magic and wild beasts. The biggest threat of all though comes from the North - the chilling wind of the Ice, which seeks to wipe all life from this world.

The Habisfern Scrolls detail the thousand years of history since the time of the Betrayal, when the god Rorn was slain, and famine and war struck down the Five Kingdoms of Men. Out of the chaos which followed, the People of Rorn forged a new Kingdom, that of Weidany, and it is here that the campaign is set.

The Kingdom is ruled by its great noble houses, and through them its Queen. Along side the nobility are the various religious cults which claim any political power that they can.

The source to the Habisfern campaign articles (they are published under the GPL) are now available on Github. The game system used is YAGS, which is also GPL'd.

For information on areas outside of the main campaign, see Eorthe, or any of the articles below:

The area covered by the Habisfern campaign is not limited by any specific geographic or political region. The Kingdom of Weidany is at it's centre, and it stretches about as far as the Kingdom as knowledge of - Bryteland, Cadwold, and parts of Tanwall, Danuch and Nailand. 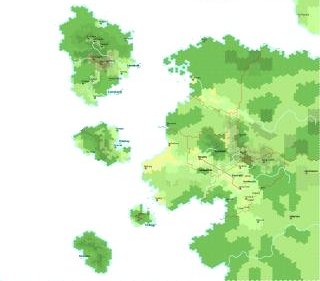 Less civilised than Weidany, the Kingdoms of Bryteland are led by warring Kings and warrior lords who call themselves Jarls. They follow their war god Voltan almost to the exclusion of all other gods. Border wars between Weidany and Bryteland are common, but Bryteland is more worried about Tanwall.

Once part of the Kingdom of Weidany, Cadwold recently obtained independence. A war is now being fought in an attempt to bring the country back into the fold. A fully independent Cadwold is feared by Weidany since it would probably ally with the Druids of Danuch.

The Druids once ruled all of Weidany, but they were conquered and wiped out in all lands save for Danuch. The Druids follow their mother goddess, Yammath and make use of the corrupt powers of the Elders.

Tanwall borders onto Bryteland, and is similar in many respects. However, the people of Tanwall have forsaken their human gods and taken to the worship of the Animal Powers instead.

South and east of Weidany are large stretches of uncivilised grass plains and woodlands, known collectively as Nailand. The region is inhabited by a race of short and hairy folk who regularly make raids on the Kingdom. They are considered a minor threat, and plans to subdue the short folk and populate their lands are always being considered, though have yet to be implemented.

North even of Bryteland and Tanwall, off the coast of Euressa, is the semi-mystical island known as Taneith. It is said to be populated by a wild folk who are fiercely independent and heavily tainted by the magic of their land. Taneith is not considered part of the Habisfern campaign, but has been the focus of a campaign setting of its own in the past.

The Northern Kingdoms lay to the north-east of Weidany, and communication between the two lands is rare. They are barely detailed, and have never been the focus of a campaign.

After the retreat of the Ice, eastern Euressa was populated by cultures who had stayed behind in the Old World. They are not descended from the People of Rorn, but together make up what is known as the Eastern Kingdoms.

Fleeing the fall of the Old Civilisations to the Ice in the far east, the People of Rorn followed their god to the lands of the west which were warmed by southerly seas.

They settled in the promised land of Tarvallah, and the Chosen stayed to build up great Kingdoms. But Rorn was slain in a battle amongst the gods, and blood and fire rained down upon the promised lands, and brought with them famine and disease. So the Rornic people again fled west, and came across those who had not stayed in Tarvallah. Their lands were fertile, peaceful and sparsely populated, so the Rornic people made war upon the westerners and took their land for their own.

That was over a thousand years ago. Kingdoms have risen and fallen in that time, but the Rornic people have stayed. The Kingdom of Lanuch was the first of the Rornic kingdoms in the West, though is now a mere shire of the greater Kingdom of Weidany. 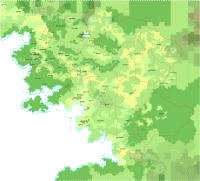 The Kingdom of Weidany has always been ruled by a Queen descended from the first Queen Aelfthryth who first took the throne in 994 - some two hundred years ago. She was brought up by a cult of warrior women who still hold considerable power today as the Cult of Neya, goddess of promises.

Today, the Kingdom is home to some two million people, and various thegns, cults and merchants play the ever present game of politics to carve themselves out a big a slice of power as possible.

Forces outside the Kingdom also struggle for control. The Kingdom is currently at war with Cadwold, a nation corrupted by the dark arts of the Druids. The Kingdoms of Bryteland also make their presence felt, though conflict here is mostly limited to border skirmishes rather than all out warfare.

It was the god Rorn who led his people out from the path of the Ice, which crushed all before it. The Ice has always been, and always will be. It is not evil, for it has no concept of morality. It merely seeks to claim everything within its embrace. The Ice seeks stability and conformity. Within the ideals of the Ice, there is no room for passion or human feelings.

The Ice is a Power, a darkness which is the enemy of all humanity. Some of course seek to do its bidding, in order to gain short term power. Ultimately though, the Ice seeks an end to all things.

Within the campaign, the Ice is the ultimate, final, enemy. However, it's agents are rarely met, and it can never be defeated. Winter cannot be fought, merely sheltered from.