Berlichingen is a world of small mining townships built into the barren rock. Many are miners, extracting precious metals dissolved in the subterranean water deposits. A handful of rich families own most of the land, and charge a cut of any minerals dug up. The starport is the only entertainment centre, where anything can be had for a price.

There are two M3 red dwarf stars which orbit within 5 million kilometres of each other.

Berlichingen is an airless rock world, which lost its atmosphere over a hundred million years ago, possibly due to a near miss with a large planetoid. There was plenty of water once though, and it's not just the flat basins of sand covering large parts of the surface. From orbit, it looks a lot redder than it actually is, due to the light from the twin red dwarfs. 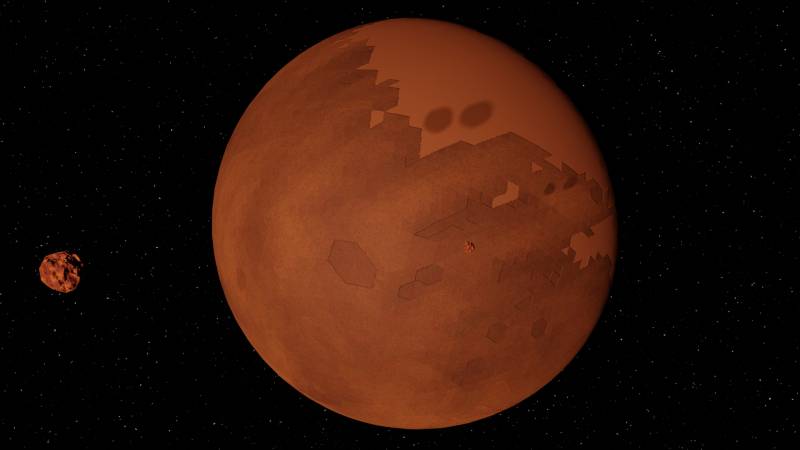 There are pockets of subterranean ice, which is mined for fresh water by the 60,000 people that live here. The water is contaminated by metals, including gold, which are the world's only export.

As well as a trading hub, the starport is the world's only entertainment centre. Beyond the bounds of the port are the usual collection of dodgy outlets for people's frustrations and energy. Rails take people along the equator, where most of the ice mining towns are found.

It has a day of just over five hours and spins on an axis tilted at 45°. It has two moons, the inner is 200km in diameter, the outer nearer 700km. Due to the double suns, they cast twin shadows on the surface of the planet.

There are a few palaeontology sites researching fossils of life that once lived here - long creatures with many legs, plants and fish. All wiped out when the world's atmosphere was stripped away.

Berlichingen is the sixth world. The first four are small hell worlds within 3 AU of the binaries, locked in a complex resonance. The fifth is a dead world half the diameter of Berlichingen.

The others are rocky worlds twice as far from their parents as Berlichingen, as if there's a gap in the normal sequence. They have some ice and other volatiles, though the distances involved mean few see the trip as worthwhile.

There are some independent settlements on these worlds, and they will sometimes shoot at trespassers. None have a population above a thousand though.