Topas is simply described as a single radioactive desert, where people shelter in the ruins of war torn subterranean cities. The atmosphere is too thin to breathe, and water is almost non-existent. The cities are ruled by a single huge bureaucracy that stifles free enterprise, and strictly controls the distribution of power, air, water and food.

There are 'pirates' around Hybris, and sometimes some in the outer system. A fast ship may be able to get to an outer planet, refuel and take off being being caught, but other ships leave it up to the whim of those who control access to hydrogen.

Topas is a dry, almost airless world that is geologically active. There are even signs of massive geological activity about ten million years ago which resurfaced a region over a 1,000km across. The atmosphere is too thin to breathe and filled with radioactive dust (though, at least in the low lands, a pressure suit is not needed), and the general surface radiation level is around 30mSv/month, though it spikes to much higher levels in some areas. 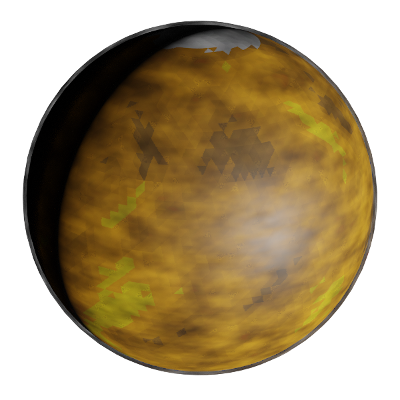 There are very thin ice caps at the poles, though it mostly consists of carbon dioxide ice so is not suitable as starship fuel.

About 800 years ago, the settlers of Topas were involved in a civil war that resulted in the heavy use of nuclear weapons, and wiped out over three quarters of the population. Many survivors left the world aboard the generation ship Voyageur and went on to settle Zuflucht, but those that stayed vowed to rebuild their cities.

Several organisations were setup to manage the rebuilding, and over the course of the next few centuries they morphed into a massive bureaucracy which effectively governs the world today with an iron fist.

The world has a population of just over 300 million, most of whom live in sealed cities built into craters or constructed underground. The largest city, also the starport, is Uneville, with a population of 21 million. There are six other cities with similar populations, and all of them are sprawling subterranean affairs where most people never see the light of day. The wealthy, or lucky, get to live on or near the surface, but the view from there isn't much better.

Shortly after the war, Topas set up a number of Commissions which were each given control of a different aspect of rebuilding civilisation. They eventually turned into monopolies which will do anything to maintain their power, and act without any oversight.

A corporation which has a monopoly on the distribution of air, water and power across the planet. In theory, they ensure fair and equal access to everyone. In practice, they have their favourites and often withhold supplies from any settlement which steps out of line.

Power mostly comes from fission power plants across the surface of the world, and few people are concerned about a bit of extra radiation if there are leaks.

Water partially comes from underground reservoirs, but also from off-world. In either case, it is heavily recycled.

The Topas Police Commission provides security services for the Bureaucracy, often acting as judge, jury and executioner when needed. They are generally hated and feared, especially by the less well off. However, they are rarely seen by visitors since they stay away from the main starport.

The TPC are easily recognisable in their black and gold uniforms.

The Starport Commission runs the starport at Uneville, and also handles off-world trade, including the arrangement with the 'pirates' at Hybris.

The Starport Commission controls access to incoming and outgoing trade, making sure it is suitably distributed to where it is needed. This has come about through levels of bureaucracy rather than due to any specific adherence to ideology. Due to corruption and incompetence, critical supplies don't always get to where they are needed in suitable amounts.

The Hybris Trading Consortium is a group of freelancers who have taken control of the gas giant Hybris, the 7th world in the system. It is by far the best place to refuel, and they tightly restrict access to it for anyone other than themselves. They have a deal with the Starport Commission where Topas grants them rights over the gas world, in exchange for a trade agreement to bring fuel and water to the inner world.

Though they describe themselves as merchants, others see them as pirates and smugglers who have merely settled down to a more sedentary lifestyle. They will attack people who try to scoop fuel from their world, unless they are obviously heavily armed or escorted. They prefer to board and take a cut of any goods rather than destroy.

The other worlds in the system are dry, mostly waterless worlds.

An artist who lives out in the ruins about a day's drive from the starport. He makes exquisite animal statuettes from the volcanic glass that is commonly available on Topas.

He uses the money to keep a commune of friends and family protected and fed.