Zuflucht would be an unimpressive world if it wasn't the spinward gateway to the Islands. It is technically independent, but has a strong Imperium presence. Most of the population lives around the coast of the Mer Violette in large walled communes each with their own security services. Outside of the communes, there are few laws and regulations except those enforced by force of arms.

A small world with a population of about 60 million, it is dry with a thin atmosphere, but has enough of an ecology to be liveable. 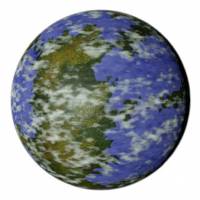 For a world that is so crucial to the link between the spinward and trailing halves of the Imperium, it is otherwise a relatively unimportant world, with an unimpressive population, low technology level and limited starport facilities.

The bulk of the population is centred in a crescent around the Mer Violette in the northern hemisphere, with about forty million people living in communes there. A 'commune' is a self-autonomous region with its own security forces and social systems. There are very few laws enforced across the world, most of them around enforcing contracts between individuals and companies.

The world has a thin, tainted atmosphere. Pollen can cause an allergic reaction similar to hay-fever (END 6+ to avoid, -1 to all actions after a day due to headaches and sneezing), or even cause breathing difficulties (END 2+ to avoid, otherwise -1 END every day). Wearing a simple cloth face mask grants a +1 to the check.

The government is a Participating Democracy. There is no single leader, but a Supreme Court of 11 judges who rule on the interpretation of laws. Laws are voted on directly by citizens, with a 65% majority required to get a new law passed. As such, it's almost impossible to get new laws approved. Each judge serves a time of 7 years, and each person is only allowed to serve once.

Laws are mostly limited to foreign relations and how contracts are enforced and applied across the world. Individual communes often have tighter sets of laws (such as limits on weapons, what can be contracted, social welfare etc), but as a world there are few limits. Use of weapons of mass destruction are banned, and it's not legal to have a contract that involves the death of an individual, nor anything that requires servitude lasting more than 7 years. Laws also prohibit murder, serious harm and theft.

There are no global police or security services. A commune will often have its own, but for those living outside the communes, it is left up to individuals to enforce law and punishment. It's not a complete anarchy, since there are agreed upon fines for different infractions. There are no official prisons - breaking a law leads to a fine. If you can't pay a fine, then you will be declared an outlaw in which case you give up all property rights and no laws protect you.

There are groups which provide financing to those who can't pay, just as there are groups that will take on investigation and enforcement for a price.

If a crime is committed (murder, theft of property, breaking a contract), then a jury of peers will decide the fate of the accused. For serious crimes, this is generally very quick - within a few days of accusation. There are no judges in such courts - the jury decide guilt, legal interpretation and punishment.

Evidence may be presented during the trial, but it's up to the prosecution and defence to obtain that evidence. There are groups that can be paid to do this, or the defence or prosecution can do it themselves. If the defence is locked up, has no friends to help them and no money to pay for someone to find evidence on their behalf, then the chance of being found guilty is very high.

Having friends and being part of a social group on Zuflucht can be very important.

Zuflucht is relatively low tech compared to the Imperium. Most technology is limited to personal equipment - computers, digital communications and that sort of thing. Most connect into a world wide social media site where the bulk of online activity occurs. With no regulations on businesses, most infrastructure has fallen under the control of single large corporate entities, which control distribution to the various communes.

The people here don't like being told what to do, or what they can or can't say, and there are multiple cultural factions across the world that are quite aggressive in their views.

Bordeaux is the site of the main downport. Though it is classed as a C, it is somewhat larger than most C class ports, it just lacks the facilities required to obtain a B rating. There is no border around the starport - people come and go as they please, as long as a docking berth is paid for.

The starport itself has a population of about a quarter of a million, though there are another seven walled communes nearby which add another three million to the total.

There is an office here for Deepnight Exploration. They mostly collect information from the various missions that Deepnight has going on around the Rift.

LSP has an office here that manages shipments traversing between the Islands and the Trojan Reach. They mostly have their own ships, but will have a number of jobs for smaller independent ships for cargo that needs to be shipped off the normal schedules.

The Trans-Rift Corporation owns a number of large tenders designed for carrying smaller ships across the Rift. They are Jump-4 capable, and are in the 30,000t to 60,000t range. They have regular scheduled flights from the Trojan Reach to Gushmege and back, providing a way for less capable ships to get across the Rift.

Currently, its fleet consists of Monarque, Espoir des Étoiles and Saint Charles. It is a company based out of Amondiage, where the headquarters are located.

There are a number of 'enforcement agencies' based at the starport. They mostly provide services to locals, hunting down those who have committed wrongs, and bringing them to justice. There is no global police force, so if you are unable to seek revenge/justice yourself then there are groups who can be hired.

Have a good investigation team, capable of finding out who committed some crime, rather than just focusing on hunting them down afterwards.

The largest of the enforcement agencies, known to be reliable and stick to the contract. Can be pricey.

Cheaper than some others, can be heavy handed at times and seem to enjoy their jobs a bit too much.