Pathfinder character sheets will be used in Roll20.

The three value bars are used as follows:

There are a number of macros which might be useful to people, plus there's a few I have made standard for everyone (they begin with an exclamation mark, e.g. !Initiative) so they appear first if sorting alphabetically, which as GM makes it really easy for me.

These macros tend to make use of either character sheet options, or some of the API scripts I have enabled.

Note that when I say 'Macro', this can either be a global macro, or an Ability on a character. Character abilities only apply to a specific character, and are only displayed at the top when a token for that character is selected. Macros are more generic, and can appear at the bottom all the time.

This adds (or removes) tokens from an existing initiative track.

Note the &#125; in the macro. This is important (it represents an embedded '}'). Unfortunately, every time the macro is edited, this is expanded to be '}', which breaks the macro. It will need to be changed back before saving any changes.

This provides some actions for making tokens ready an action, or delaying or undelaying them.

Delay / Ready - The current active token (in the turn order) will be marked as delayed or readied.

This is automatically set up for everyone, and appears when a token is selected.

This rolls initiative for all tokens you have selected, and adds them to the initiative tracker. The character's Dexterity score is added as a percentile for use as a tie breaker. The output will look like this:

This is automatically set up for everyone, and appears when a token is selected.

This macro is used to display saving throws for the selected token. All three saves are rolled simultaneously, which allows one button for everything.

The output is whispered to the GM, and will look like this:

This is an example, and will need to be setup yourself. It is available as a button on your character sheet, but you may want to create a macro for it for quick access.

As an aside, all the pink buttons in the character sheet can be converted to macros. To find the macro, click the button then hit 'up arrow' in the chat window to see the command that was run. You can then copy this command into a macro. You can swap out the name of the character for 'selected' to make it a general purpose macro. On the other hand, if you leave the name in, it will work even if your character isn't selected.

It's easiest to show what this does than describe it: 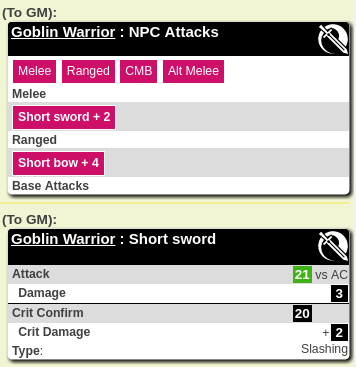 It shows a number of buttons for base attack types (melee, ranged, CMB etc), as well as specific attacks that you've set up. Clicking one of them will automatically roll the attack, including damage rolls and critical rolls if required.

This is an example, and will need to be setup yourself. It is available as a button on your character sheet, but you may want to create a macro for it for quick access.

Similar to the 'attack' macro for combat, this lists all your spells, and provides buttons to cast them. It also has buttons for a caster level check, and concentration check. 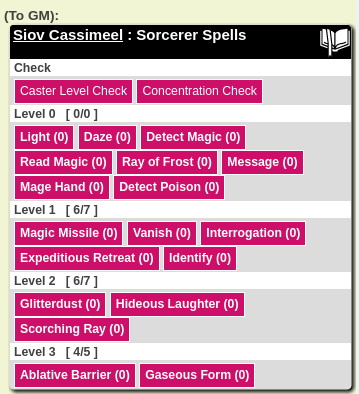 Clicking any of the spell buttons will output all the spell details that have been defined on the character sheet, as well as automatically making caster level and concentration checks for you.

There are a number of skill macros available. Some I've set up as defaults, or you can write your own. Currently, they consist of:

You can execute these by clicking a macro button, or by typing #SocialSkills etc into the chat window. In the latter case, if no token is selected it will try to figure out which is your character itself.

The purpose of this is to make one die roll, and then apply it to all the skills given in the list. This allows me as GM to say “make a knowledge check”, without telling you exactly which knowledge to roll.

!pfskills is an API command, which takes the following parameters:

Attributes can be included in the list by prefixing with a percent symbol, e.g. %Strength. Skills which have spaces in the name, such as Knowledge-Nature, use hyphens instead of a space.

Specialist skills such as Perform, Craft, and Lore should have an asterisk at the end, e.g. Lore*. This will roll all your sub-skills. 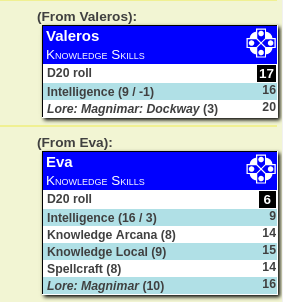 Your total score is shown for each skill, as well as the original die roll. If you want to Take 10 or Take 20, then it's probably easier just to manually add the 10 or 20 to the score rather than having separate macros for this. The score includes all current penalties for the character.

It is possible to write the macro so it gives the option of a die roll or Take 10/20 options. In this case, replace the roll parameter with something like this:

If you want a limited number of macros, then the following super-macro allows you to select which sets of skills to roll. The first item on the list are Common skills, which are the sort of skills which are rolled regularly. The rest are broken down by category.

Available for general use, and designed to allow you to select tokens you aren't normally allowed to select. After running the macro, you will have the option to select the token.

This will output a portrait of the character selected, along with a description of them.

If the token has any particular status effects on them, then it will also output these after the description. This includes current hitpoint status, and effects such as stunned, fatigued or nauseated.

The following is a GM macro for outputting the tactics of a character. Useful when combat is about to begin and you want a reminder of how that particular creature fights.

Sets status effects on selected tokens. Available for general use.

It is possible to use the usual status list directly from the token, but using this macro guarantees consistency between actual Pathfinder effects across all the macros and APIs, e.g. the Describe macro listed above. If possible, they will try to link to effects on the character sheet, as long as there is a link for the HP from the token to the character.

I have a number of API Scripts that the campaign will make use of in order to simplify some things. Some of these are designed with blind players in mind (so provide text output, or allow text commands without needing to select anything).

Provides a number of utilities for handling combat related tasks.

A single API command can roll initiative for all selected tokens, or for your character if no token is selected. This can be typed into the chat window, and it is exactly the same as the macro. The Dexterity of the character is added as a fractional modifier for tie breaking.

If an optional argument is passed, then this is used as the roll. This is designed for use when using Roll20 as a tabletop aid, and players are rolling their own initiative for the GM to fill in within Roll20. The dexterity score is then added as a fractional modifier.

A green status marker means that the token has stabilised.

To do damage to a token, just type:

This will do the specified number of hp in damage, and output a result if the character is moderately or heavily wounded, or dying or dead.

To do nonlethal damage to a token, just type:

Again, the specified number of hp of nonlethal damage will be done. You can actually just shorten the second argument to 'n' if you want.

If no token is selected, it will try to work out which token is yours.

Displays the current hitpoint status of your character.

Heals a token a specified amount of damage.

Your new hitpoints will be capped to your maximum hitpoints. If you don't specify a number of hitpoints, it will not only fully heal you, but also remove any status effects on the token (such as blindness, stunned etc).

Makes a saving throw for the selected character, or your character if none are selected.

This will simply roll the specified saving throw. The ref, fort or wil can be spelt out in full (e.g. reflex) if you really want to.

If you want, you can also specify the DC as the second argument, and in which case it will tell you whether you succeed or failed. If multiple characters are selected, a flag symbol will be placed on all tokens that failed.

For an even more advanced use (and these features were really written for GM use), you can specify the effects that happen on success/failure. e.g.:

Since these can be applied to multiple selected tokens, they are most useful for the GM.