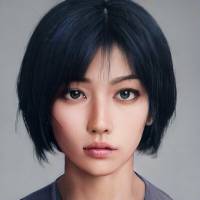 Akurlua came from nothing, got a lucky break and squandered it. She feels that the universe owes her, but that she shouldn't have to do much to get it. She portrays herself as hard done by, but will take advantage of anyone who tries to help her. She's not actively planning to betray everyone, she's just not good at making good decisions.

Akurlua is a 34 year old Vilani woman with a thin build and short dark hair from the world of Pichot (Trojan Reach / Tobia / 3015), who managed to catch a lucky break and managed to get to a University at Tobia.

However, she wasted her time there partying and ended up dropping out of university before she graduated. She managed to get a job as a journalist for a second rate news organisation on Tobia.

She was on the cusp of breaking a major corruption scandal, when her boss stole the story from her. When the story turned out to be a scam, the blame was nevertheless put on her giving her a bad reputation. However, she got a decent payout and was told to not make a fuss.

Akurla then got a job working for a legal firm, but she soon got bored with that, dropping out after wrangling a ship share for herself. She's now looking for something more interesting.