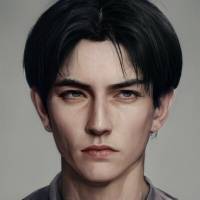 He could have had a good life, but let himself be dragged into the real world with all its complications. He still gives an aura of being a layabout playboy, but that role has lost its lustre, and he now wants to achieve things. He gives an attribute of not caring, but he'll try to involve himself if he can.

Balir was a lay about noble's son on the world of Peshtorno (Reft / Vestus / 0208) who started off life with little intention to do anything.

He tried to get into university, but was rejected even with his connections, so he decided to go on the party circuit.

Somehow he got noticed due to being in the right place at the right time, and became a minor celebrity, using that to try and boost his career by going into politics and putting his world's politics ahead of the Imperium. He only upset people though, gaining a rival in the Imperium Navy.

He soon made friends with a local Noble, which boosted his career further, and brought him to the attention of a group of nobles trying to further his homeworld's agenda. It failed, and there were assassination attempts against everyone. He survived, though lost his left arm. It was replaced by a cybernetic arm, and he decided to try and leave politics and rest up on his estate, learning to ride.

He tried to worm his way back into politics, but annoyed someone in the Sector's Imperial court. Soon after, he decided to bow out of the political life, wrangling himself a nice yacht in the process and a big payout from his business ventures (or bribes, depending on your point of view).