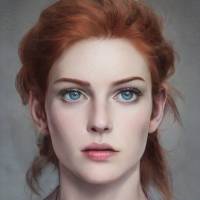 Clara is a chatty woman, she generally talks to try to hide the fact that she is often out of her depth in most things, and tries to prevent anyone from asking hard questions. If someone does ask a question she doesn't know the answer to, she will generally try to turn things around and ask them what they think.

Not particularly clever or well educated, Clara grew up on a small asteroid in Serendip Belt (Reft / New Islands / 1323) and never developed physically either. She joined a tramp freighter, and though she did okay out of it, never learned much. The crew she was with went bankrupt, but she had managed to squirrel away ownership of a ship.

She spent the next four years trying to scavenge along the border worlds in the Trojan Reach, but ran into trouble when she tried to cross Kagkar Gaadima. She barely escaped with her life, and is now looking for others to team up with again. Though she owns a ship, she doesn't even know how to fly it. In fact, she tries very hard to hide the fact that she has made it through life without learning much of anything.